The Anatomy of a Rumor 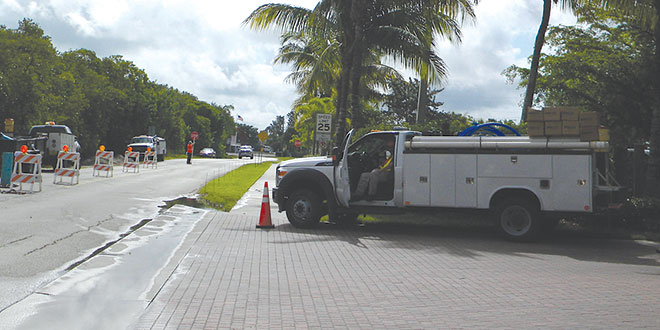 Collier County water department workers directed the light flow of traffic in and out of Goodland on June 16. PHOTOS BY MELINDA GRAY

It’s a well-known fact that big news, or any news for that matter, travels fast in a community as small as Goodland. It’s also widely accepted that as news travels farther from its source it tends to lose the original, factual information in favor of a more dramatic, sensationalized version. In short, minor issues feel like major happenings, especially this time of year.

I recently experienced this phenomenon first-hand when what eventually proved to be a routine, short-lived inconvenience was all anyone could talk about in the days leading up to the morning of June 16. Goodland was scheduled to be without water for the better part of that Monday while the island’s 15-year-old water meters were systematically replaced.

Reports describing dark days to come made their way across more than 1,800 miles, finding us in Ohio. Given the fact that we had yet to see the actual notice, the message got a little lost in translation.

Our initial understanding was that we would be without water for weeks, a worrisome situation to say the least. Forever the skeptic, I thought we should call some of our Goodland friends to see if anyone had the scoop because the story we were hearing was just so unbelievable.

We determined that some of our neighbors had seen the flyer in their doors, but weren’t sure of how many days the shut-off would last. Others hadn’t even gotten the notice, but were not happy to hear about the implied

With a job to be done, workers took relief from the high temperatures in their man-made shade.

community Port-a-Johns we would allegedly all be sharing for an indeterminate amount of time.

Hours of debate were followed by a sort of resignation to the unknown, but when we finally made it home, we were eager to lay eyes on and interpret the official paperwork for ourselves. Thankfully, it contained almost none of the aforementioned doom and gloom that was expected. We set out in preparation, and when the day did arrive, the whole ordeal was virtually painless.

As promised, a small tent was set up across from Stan’s providing bottled water to anyone who needed it, and three Port-a-Johns were offered at the boat ramp. With our showers out of the way and the pets’ water dishes full, the convenience of running water wasn’t even missed until late into the afternoon when, sadly, happy hour was canceled as our four local restaurants were closed.

All in all, we survived the county imposed, day-long drought, and water service was restored as the evening hours approached. We were placed on a “precautionary water boil notice” for an additional two days, and on June 18, residents were informed that bacteriological testing had deemed all was good again in Goodland.