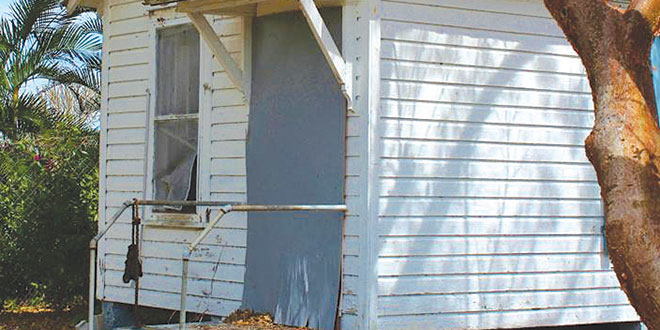 I am an artist. I am not a public speaker. I can talk about my art to any group, but beyond that I’d rather chew glass.

I am actively involved in several cultural non-profit organizations. I am not an organizer. If you’re wondering about my organizational skills just ask my husband. (Hint: He does the bookkeeping in our home, and for good reason.)

So, how is it I recently found myself standing at a podium with about 70 or so Goodland residents seated in neat rows before me and three highly-respected Collier County representatives on the dais to my right? (Seriously, who cast this movie?) Life can turn on a dime; that’s how. Best to keep your motives in good repair I say.

I am one of the founding 12 members of the Goodland Arts Alliance (GAA), and also its board president. The GAA, a 501(c)3, is a little over two years old and has been in negotiations with Collier County all this time to procure one or all of the four historic fishing cottages remaining at MarGood Harbor Park in the Village of Goodland.

The goal is two-fold: 1.) to take on the project of restoring these jewels of Southwest Florida history that have been left abandoned and locked behind a chain-link fence for the past decade; and 2.) to utilize the buildings for the benefit of the Village and the public.

I have sat at many intimidating (giant!) meeting tables in as many county offices, stating the GAA mission to “preserve, protect and advance the cultural presence in the Village of Goodland through art, history and education.” And to investigate the feasibility of leasing the cottage site from Collier County Parks and Recreation (CCPR), the stewards of the property. Each time, I had a lump in my throat, a knot in my stomach and the wish that I was standing, instead, at my easel. What was I thinking?

The process would get so far. Then, there would be personnel changes in the county offices, and we’d have to start all over again. Frustrating. One person who has remained involved from the beginning is County Commissioner Donna Fiala. She has sat beside me at most of these meetings, and she was on that dais next to me at the same community meeting that placed me at that podium with the feeling that I had swallowed a whole tomato…too frightened even to swallow.

Last June, in yet another meeting, CCPR requested the GAA host a community meeting to gage the support of Village residents for their mission. GAA members canvassed the community with flyers, invited members of the Goodland Civic Association at their regular monthly meeting, and published internet announcements of the scheduled event.

Forward motion! Hoo-ray! Until the week before “showtime,” and it occurred to me that the GAA would actually have to give a formal presentation to the group —and that the presenter would be me. Again, what was I thinking? Really, I just want to paint.

Through the buzz of white-noise in 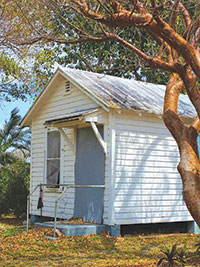 my head, I could faintly hear myself read from notes (there were four pages of them!) Done. So far so good. After that the room was opened up to Q & A. Some of the opening questions were fairly aggressive, tainted by rumor and uncertainty. I answered as honestly and calmly as I could.

Many folks aired grievances with how MarGood Harbor Park, as a whole, was initially developed, or how it was currently being operated. Hmm, hadn’t seen off-topic remarks coming, and there were a lot. Luckily, all three women seated to my right had. Commissioner Fiala, CCPR Assistant Director Jeanine MacPherson and CCPR Regional Director Nancy Olson (who also has been a champion for us from the beginning), all had experienced discussions that swerved from an original singular topic. I took their lead: Stay patient; stay on track.

Positive remarks began coming from the audience. “Oh look,” I’d think, “a friend.” And then another friend and another. Suddenly it became easy, well, at least natural. These people were more than friends; they were family, agreeable or not.

I was speaking with family.

Goodlanders are a family — sometimes a big dysfunctional family (and I’ve got some experience with that) — but still a family. We all love Goodland and have reasons to be suspicious of new ideas. At some point, I faded from presenting to conversing. They just wanted answers, and I had answers!

I know this stuff; I know it because I believe in it. My information and the GAA’s motives are spot-on. I knew it the way I know one of my own paintings: the motivation, the inspiration, the goal. The goodness. I knew it the way I knew the hearts of all the GAA volunteers who have worked tirelessly to get to this day, and what I didn’t know, the women on the dais did.

When a show of hands for support was asked for by Goodland’s Queen of Heart Margi Fortune, a sea of hands went up followed by lively applause. Thereupon, Commissioner Fiala said she would move the GAA’s petition for historic designation of the cottages to the next County Commissioners’ meeting agenda — something the GAA had been trying to do for 11 months. Historic designation would, speaking practically, cut the renovation costs considerably since historic restoration doesn’t have to abide by today’s stricter building codes.

Do I regret all the time spent away from my own artistic endeavors? Nope.

Somethings are, quite simply, bigger than ourselves, and the artful life must recognize that it takes more than one’s own work to be fulfilled. Choose wisely.