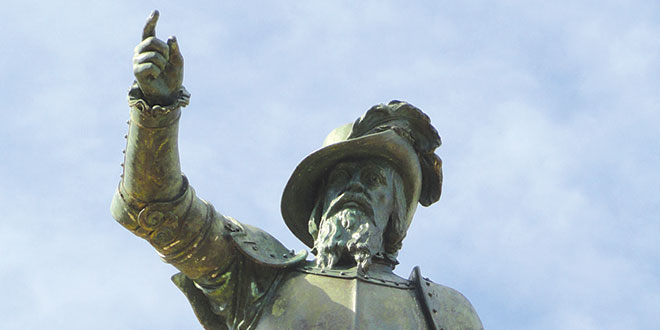 What if the great Spanish explorer Juan Ponce de Leon tried to set up a colony along the shores of Southwest Florida? What if he wrote a letter to the king of Spain about the mysteries he found on the gulf coast shores but the letter was lost in the sands of time? What if the letter reappeared 500 years later, found on a beach by a curious little girl and her father? What if finding this letter turned everything historically known about Ponce de Leon and his expeditions upside down?

These are the questions Naples-based writer and director Richard Watts asks in his upcoming film “The 4th Letter of Ponce de Leon.” Now in development, the film focuses on eight-year-old Orchid Lancaster and her museum curator father, Rye. Orchid finds a small locked chest on a beach in Naples. She and her dad take the chest to a friend who opens it for them, and finds a letter written on leather and a vial of holy water. Through a detailed process of verification, Orchid and Rye discover that the letter was written by Ponce de Leon to the Spanish Crown. There is just one problem: The letter is dated 1522, and by all historical accounts Ponce de Leon died in the summer of 1521 in Cuba from wounds he suffered during a battle with the Calusa Indians in Southwest Florida. Thus, father and daughter embark on a historical journey that takes them up and down the gulf coast of Florida where they meet a wide array of interesting and inviting characters along the way.

“It is an independent film,” says Watts. “It is a candy bar for the mind. When people come out of 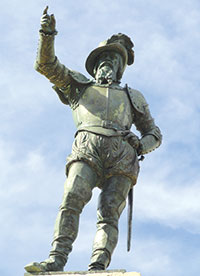 the theater, they feel so much better. This film shows that history may not be what you think that it is.”

Along for the ride is Marco Island theater maven Gina Sisbarro, who has signed on as a producer for the film. “She is the only person I know who can take an unbelievable challenge and make it an asset,” Watts says of Sisbarro. Watts also is getting assistance from 28-year-old actress Austin Graham, who is the 14th great-granddaughter of Ponce de Leon. She is a spokesperson for the film.

To give the movie an authentic air, Watts plans to film it on location between Marco Island and Pine Island. He has a historical consultant on staff and is working with a re-enactor group from St. Augustine for the flashback scenes of Ponce de Leon. “They have authentic costumes, and one man even owns a horse who descends from a horse brought here in the 1400s…They authentic right down to their socks,” notes Watts.

Watts plans to cast the film in late summer or early fall 2015, and have it ready for release in fall 2016. To make this plan a reality, though, Watts and his team need funding to back the film. They will start with a crowdfunding campaign on Indiegogo in the coming months, and Watts also will put his experience as a producer of commercials and corporate films to use in “The 4th Letter” through the wonders of product placement.

“I would love for this film to be a vehicle for local products as well,” explains Watts. “I want to find some local people with really great products, artists with an unusual take on things, and weave them into the plot and allow them to showcase 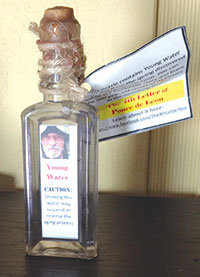 whatever they want people to see.”

One product already on board is calamondin jam from the Calamondin Cafe in Fort Myers. This jam will be served at a bed and breakfast owned by one of the characters in the movie named Mrs. Georgette Cabot. A local band known as the Honey Creepers also will be featured in the movie and now is working on a special love song for the film.

Currently, Watts and his crew are working on a trailer for the crowdfunding campaign. He has cast local actors Val Kuffel (Indian Shaman), Zara Aramani (Italian curator of the museum) and Margaret Bishop (interviewer for the crowdfunding campaign) to appear in the trailer. The Lee County Tourism Development Council has agreed to put the trailer on its youtube channel, and Watts is working with Collier County museums as well.

“Right now, it is really about how big of a footprint we can establish before we begin. We have to market this rabidly. The film has a natural attraction for this area, so we continue to look for people that are interested in being a part of it,” says Watt.

In the end, though, he hopes to make a film, tell a story, that resonates with people. He wants people to walk out of theater and talk about what they saw. He wants to create characters people understand and to which they relate. Most of all he wants to tell a good story.

“Films tell you about the world,” Watts notes. “Films are stories, and stories help you understand the world and change your perspective because you are seeing it through someone else’s eyes. You become a richer person because of that experience.”