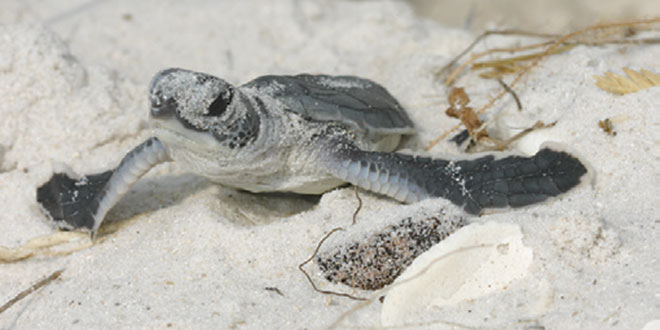 Great news, like my favorite football team the Denver Broncos during Super Bowl 50, sea turtles were a winner last year as their nesting numbers are trending upward! I recently attended the sea turtle permit holders meeting in Jacksonville, where basically a lot of people gather to talk turtles and discuss the 2015 highlights and players of the year.

The main players that take to our beaches every year are the loggerhead (Caretta caretta), the green turtle (Chelonia mydas), and the leatherback (Dermochelys coriacea), while the hawksbill (Eretmochelys imbricata) and Kemp’s ridley (Lepidochelys kempii) turtles come off the bench infrequently as they tend to nest outside of Florida. All five species are listed as either threatened or endangered under the Endangered Species Act and nesting occurs in all Florida coastal counties except in the Big Bend area.

Like any game there are rules or in our case disclaimers to the 2015 nesting season:

The effort and frequency of nest monitoring differs throughout Florida so all games are not equal and many of the players are not accounted for.

All arenas are not equal, some beaches are accreting and thus have more nesting area, while others are eroding and accommodate less nesting turtles.

Certain teams have a higher following, as fans survey effort is targeted principally during the time that loggerheads usually nest. Green turtles and leatherbacks have overlapping, but different nesting seasons, thus they are not fully represented in the data.

There is a good possibility that faulty scores occur since it is difficult to determine how successful a nest actually is and how many baby sea turtles touchdown in the Atlantic or Gulf of Mexico so errors may appear in the final scoreboard.

Last year had a bumper crop of sea turtle nests:

Green sea turtles had a phenomenal season this year winning the best Florida team of 2015. Preliminary numbers were spectacular (~37339 nests), an exponential increase of 70% over the past 27 years. So perhaps all those conservation efforts are finally paying off. We even had more green sea turtle nests on our own monitoring beaches than we have ever had before (17!).

The leatherback’s 2015 season was small, but mighty, (preliminary numbers coming in at 1493 nests). Considering that we started with only 27 nests two and a half decades ago this makes the leatherbacks the most improved team of 2015. We even found a leatherback nest on our beach, where they had never been recorded in the past!

Loggerheads are definitely the home team. Approximately 80% of the global loggerhead population nests either on Florida beaches or in Oman on the Arabian Peninsula. Florida alone accounts for ~ 90% of U.S. loggerhead nesting. Like many a home team, loggerheads have had good seasons and bad seasons and their nesting totals overtime looks a lot like a rollercoaster. Scores peaked in 1998, bottomed out in 2007, and since then have rebounded. Preliminary nesting numbers come in at ~89,287 indicating a general increase in nest counts. This may seem like a lot in comparison to the other turtle teams, but remember that Florida is the primary arena where these turtles come to nest, which is not necessarily the case for the other teams. We had a good season this year with 507 nests on the beaches Conservancy referees watch over.

Honorary mention goes to the Kemp’s ridley (preliminary nest numbers = 14 (2 are pending tests) and the Hawksbill (3 nests pending confirmation). Primary nesting arenas for these species are outside of Florida.

So as Conservancy biologists gear up for the 2016 sea turtle nesting season we are hoping for a lot of high scores from all of the teams.

About the Conservancy of Southwest Florida

The Conservancy of Southwest Florida is a not-for-profit organization working to protect the water, land and wildlife in Collier, Lee, Charlotte, Hendry and Glades counties. The organization leverages the combined expertise environmental science, policy, education and wildlife rehabilitation teams to meet this mission.