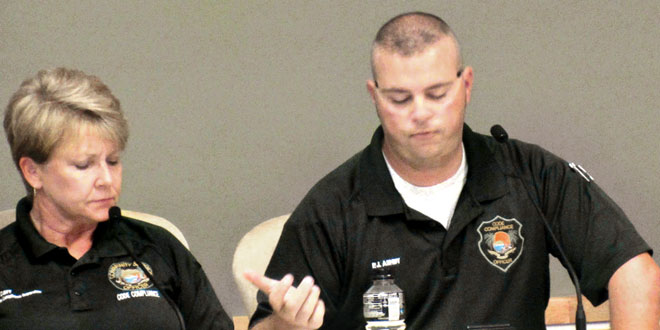 When city staff showed “irreparable and irreversible damage” had been done to environmentally protected gopher tortoise burrows on an undeveloped lot, at the December meeting the Code Enforcement Board ruled that AAA Lot Service owner Bernard Wegman mitigate with a contribution of $1,950. The money will be used to purchase warning signs and Wegman will also pay the $250 administration cost incurred.

One of Wegman’s employees, terminated from his job since the incident, mowed not just the right of way at the undeveloped lot at 1750 Dogwood Drive, but also, according to city environmental expert Nancy Richie, 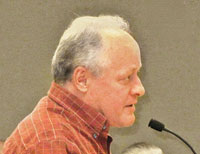 Bernard Wegman, owner of AAA Lot Service, said he had terminated theemployment of the person who had destroyed the burrows, accepted responsibility and agreed to do “whatever it takes” to mitigate for the damagedgopher tortoise burrows.

knocked over warning stakes and tapes that marked six tortoise burrows. Three of the burrows may still be active, she said, and one is questionable.

Dogwood Drive resident Brian McLaren reported the damage when the burrows were “flattened” after the first mowing, and said he was shocked to see the company return a second time.

“It didn’t look malicious,” McLaren stated. “He just didn’t know what he was doing.”

All agreed with Code Board Chairman Lou Prigge that the damage was “very serious but not malicious.”

McLaren was thanked for calling the city’s attention to the incident, and Prigge pointed out the need for 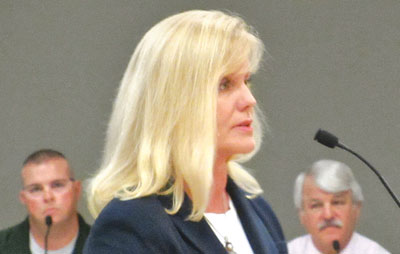 Nancy Richie, City of Marco IslandEnvironmental Specialist, explained hownecessary it is to maintain an ecologicalbalance in the community by looking afterthese protected species. She recommendedusing the mitigation funds to purchasemore needed warning signs to be posted inareas highly populated by gopher tortoises.

residents to act as extra eyes.

The mitigation costs, almost equal to fines that would have been charged for destroying the burrows and their inhabitants, will be used to purchase much-needed signs warning of tortoise nests in areas heavily populated by this protected species.

Concerned property owner Roland Kowal also appeared, to state that he was fully aware of his responsibility, understood the city code and cares about the environment. The board agreed that it was not his responsibility to educate lawn service companies and voted unanimously to dismiss all charges against him. Further discussion seemed to indicate that this was an

Roland T. Kowal, the owner of property at 1750 Dogwood Drive, explained that he was cognizant of the law, respectful of the environment, and had informed the landscaping company of the presence of gopher tortoises. He said there had beenno problems in the past.

unusual incident caused by an ex-employee who was unfamiliar with city codes.

Wegman’s offer of mitigation was labeled by city attorney Burt Saunders as “a tax deductible contribution to the city”.

A property at 209 S. Heathwood Dr. sought to mitigate fines of $87,000 plus costs for failure to connect to the city sewer system. The board voted unanimously to accept member Rony Joel’s motion of $6,409.95 to be paid within 30 days, or the original fine will be charged.

In a similar case concerning 581 Diplomat Court, the board waived the accrued fines and accepted payment for the administrative fee only, as

Liz Carr, Code Compliance Supervisor (left) and city attorney Burt Saunders (right) listen to Code Compliance Officer Paul Ashby give evidence against an ex-employee of AAA Lot Service owned by Bernard Wegman. The company was accused of irreparable and irreversible damage to the burrows of a protected species, the gopher tortoise. SUBMITTED photos

the home has an offer to purchase pending and they agreed unanimously it would be more positive to facilitate turning the home over to productive ownership.

In a case involving the City of Marco Island vs James L. Karl Trust, at a business property at 695 Bald Eagle Drive, owners have apparently not applied for building permits, commercial zoning permits, or applied for fire inspections as needed during renovations. In the future they will be treated as ‘repeat offenders’ and could face much larger penalties.

Code Board meetings are held at 3 p.m. at City Hall, on the second Tuesday of the month. The public is welcome to attend.