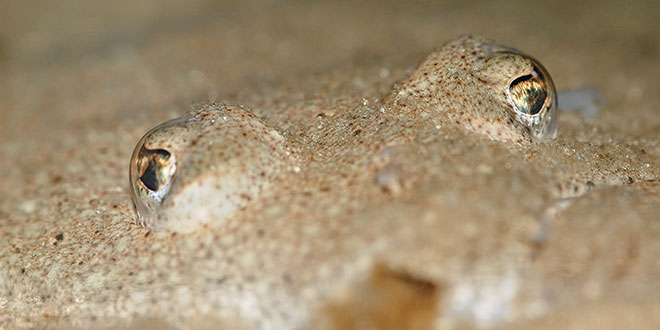 Photo by Dave GraffFlounder often cover themselves with sand, leaving only their eyes exposed.

June is National Aquarium Month and some exciting things are happening in the watery world at Rookery Bay Environmental Learning Center. Located between Naples and Marco Island, the 16,500 square-foot center features a two-story exhibit hall and was developed to serve as an interactive gateway into the 110,000-acre Rookery Bay National Estuarine Research Reserve. The center’s exhibits, nature store, art gallery and more provide a comfortable environment for kids of all ages to learn about the estuary. The center is also responsible for keeping many species of fish and other marine life comfortable in its seven aquarium tanks.

The aquaria in the center introduce visitors to the amazingly diverse community of animals found in the estuary and nearshore marine environment. Three 50-gallon focus tanks enable close-up views of some of the younger, smaller fish and unique marine life. Tank residents have included hermit crabs, barbfish (a native venomous species), seahorses, polka-dot batfish (the Center’s mascot) and a southern stargazer, which is a fish that is able to emit 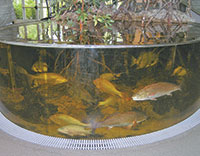 Photo by Donna YoungKids at tank: the mangrove tank enables students of any age to become immersed in the Everglades environment

an electric charge as a defense mechanism.

Because oyster reefs are a primary habitat in Florida’s shallow coastal areas, a 300-gallon tank displays a sculpted reef that provides habitat for a small school of goldspotted killifish and sheepshead minnows, as well as tulip snails and other mollusks of the reef.

The 400-gallon seagrass tank has a life-like bed of turtle grass, an important habitat for sea turtles and fish, and houses flounder, seatrout and southern puffer, to name a few.

The center’s largest tank is the 2,300-gallon mangrove aquarium. It features an 18-foot tall lifelike mangrove tree sculpture extending its leafy canopy skyward while arching prop roots provide structure for fish swimming below the water’s surface. Kids can even crawl into a ground-level bubble to see what life is like for the fish living among the protective prop roots.

The most engaging exhibit in the center is the marine life touch tank, which gives visitors an up-close and personal experience with many common marine animals such as sea stars, horseshoe crabs and 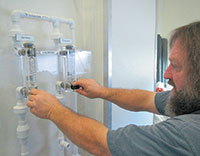 Photo by Reid Gilchrist Using the estuary water dispenser, aquarist Geoff Trager can dispense the right amount of both fresh and salt water for any tank.

Geoff Trager, Rookery Bay Reserve’s aquatic systems biologist and aquarist, has implemented several new tools to ensure every organism under his care is happy and healthy with a combination of innovation, technology and natural methods.

Trager runs the display aquariums using both mechanical and biological filtration. The living filtration system includes algae and beneficial bacteria. This system is complemented by an innovative method to dispense the perfect amount of salinity for each organism on display.

Called “instant estuary water on tap” the system dispenses the correct mix of salinity that is perfect for any creature in residence.

“By twiddling two dials on a mixer panel, we pull salt water from a nearby well and blend it with fresh water from the tap,” he added.

Even more technology is employed for monitoring. Using his smart phone, Trager can check the aquariums’ water quality – most importantly pH, dissolved oxygen and temperature – using Apex Aquarium Monitoring and Control. As long he is connected to the Internet, Trager can check on the well-being of

Photo by Donna Young Kids at tank: the mangrove tank enables students of any age to become immersed in the Everglades environment

the organisms from afar. The system lets him make adjustments remotely and also alerts him if something is wrong with the aquarium.

“I once got a call at four in the morning telling me the pH levels were critical,” he said.

Funding has been secured to enlarge and enhance the touch tank, with built-in protection against chemicals on visitors’ hands – sunscreen or bug repellent – which can harm or even kill the creatures in the tank. Previously, the tank had to be drained, cleaned and refilled on a regular basis. The new tank, which will have a flow-through system providing a steady supply of clean water, is expected to debut during the reserve’s annual National Estuaries Day celebration in September.

Renee Wilson is Communications Coordinator at Rookery Bay National Estuarine Research Reserve. She has been a Florida resident since 1986, and joined the staff at the Reserve in 2000.