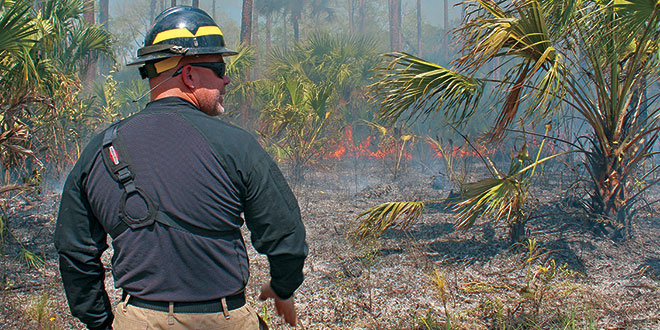 Cass Palmer, District 6 Fire Management Officer of the U.S. Fish and Wildlife Service watches over the line of fire. PHOTO BY SAMANTHA HUSTED

Most often when we hear about wildfires it is in connection to the great harm that they cause; Homes destroyed, people and animals injured or killed, and beautiful trees forever erased from nature. Yet fires are actually beneficial to Florida’s landscape, and play an integral role in its ecosystems. Periodic fire tends to favor understory species that require a more open habitat. A mosaic of burned and unburned areas tends to maximize an “edge effect” which promotes a large and varied wildlife population. Deer, dove, quail, and turkey are game species that benefit from prescribed fire in South Florida.

But the problem with naturally occurring fires is that they’re not always timely or safe. Today, as opposed to hundreds of years ago when Florida’s population was much, much smaller, natural fires caused by lightening strikes weren’t as much of an issue. There were no neighborhoods that the fire could creep into or highways dependent on clear, smoke-free roads. Uncontrolled fires can lead to all kinds of hazards, as we’ve seen in California. So humans devised a system in order to control the way our environment functions. 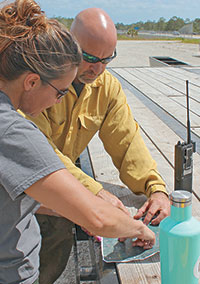 Zone Prescribed Fire Specialist Greg Suszek of the U.S. Fish and Wildlife Service and Toni Westland go over the map of the burn site.

That’s where prescribed fires – fires conducted by professionals in a controlled setting – come in.

On March 10, Coastal Breeze News met with Toni Westland, a public information officer out of J.N. Ding Darling National Wildlife Refuge. She was stationed at the Florida Panther National Wildlife Refuge off of I-75, where a prescribed burn was taking place. The first thing to know about a prescribed burn is that everyone involved takes it very seriously. Public safety is the number one concern, a point that Toni made sure to emphasize.

“Even in the middle of a fire if we’re out of prescription we stop and reevaluate,” said Toni. “It’s all about safety.”

The Florida Panther National Wildlife Refuge is divided into zones. Each zone is about 400 acres, give or take. Initially, the crew had two specific zones in mind that they wanted to burn that day. The areas were all prepped and ready to go, the helicopters were out and everyone was all geared up. But due to the wind condition, which would have pushed the smoke towards the highway, the areas fell out of prescription, making them 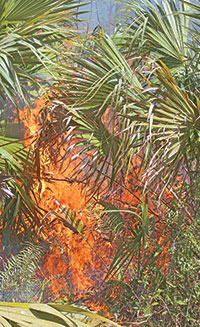 Palm trees crackled as the flames traveled up them.

unburnable. After some reevaluation the crew found another area to burn, an area that was also home to an endangered species of bat. So how does a crew go about burning 400 acres of land, while avoiding one endangered bat? Slowly and meticulously. And because these fires burn so slowly any wildlife has more than enough time to get away.

“Wind speed and direction are critical,” said Toni. “We don’t want smoke on the road. We need certain winds speeds, wind direction, temperature and relative humidity—we look into all of these factors. We get a spot forecast for the day from the Weather Center so we know exactly what’s happening on the ground. It’s amazing, they can tell us everything that’s going to happen at what time, when the relative humidity is going to drop and what that all means.”

In the refuge it rained ash and smelled like a big campfire. The fire burned in one clean, straight line, exactly how it should. And the area where the bat lived was safely out of the way. Essentially, these prescribed burns mimic the fire that would naturally occur

The fire burned in a uniform line while the smoke rose straight up. PHOTO BY SAMANTHA HUSTED

in Florida, allowing the area all the benefits of a burn, without any of the dangers. The burns also help prevent uncontrolled forest fires in the future. Because the dry foliage has already been burned away by the crew, it’s less likely to catch on fire should lightning strike. It’s just a matter of days before new foliage starts peeking up through the ashy ground.

“If we can burn these small units now when we have people and resources, that’s going to prevent a wildfire that will shut down roads,” said Toni. “Burn it now so we don’t have issues later.”