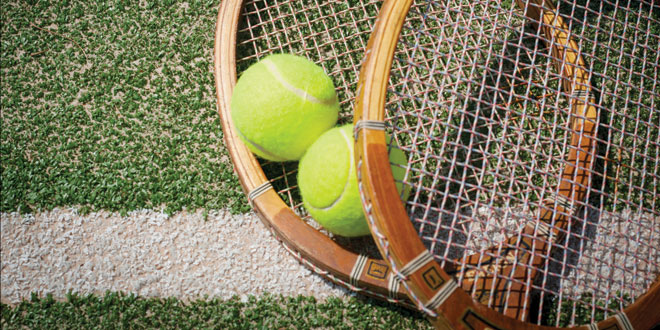 For 20 years, an informal group of about 40 locals and snowbirds gathered at the tennis courts at Tommie Barfield Elementary, to play pickup tennis games at the last free public access courts on the island. Earlier this month the courts were closed after the city determined that needed repairs would be too costly. The group suddenly found cohesion in becoming the squeaky wheel.

Over the summer, the City Parks and Recreation Committee raised the issue of the courts’ future with Community Affairs Director Bryan Milk. The committee was aware of the courts’ public use and voted to recommend the city maintain the courts but it wasn’t moved forward for council approval. Stacey Needles Whithoff was a member of the Parks and Recreation Committee. “We passed a motion to recommend that city council keep the courts open.”

Joe Mizgerd is a member of the tennis group that is seeking a way forward with the city. “Hundreds of people have enjoyed this group over the years. Anyone could just show up and they were guaranteed to play.” Mizgerd explained that the group quickly worked to raise the $10,000 needed to resurface the courts in an attempt to persuade the city to re-open the interlocal agreement with Collier County Schools that would allow the courts to be used again.

The city initially responded to the group’s concerns by giving them space at the city’s paid membership Racquet Center for free from 1 to 4 pm and all day on Saturday and Sunday, but as member Dean Heard characterized it, “That’s third class type of play.” At a public meeting on December 11 between the tennis group and the city outlined general concerns and hurdles for re-opening an interlocal agreement. One of the key requirements will likely be a formal acknowledgment of the group by both the city and the school in some form of use permit. “I believe we will have to have more rigid rules and security… [school board] public use rules have changed drastically.”

Liability was central to Milk’s explanation of why he and the city manager felt a decision to close the courts was prudent. Funding was a secondary hurdle but after the group put forward the offer of the $10,000 donation “got everyone’s attention.” Milk added that he has no budget for the TBE courts. Whether the group intends to actually contribute to the effort was unclear at the meeting after the member in charge of fundraising, Frank Leach, “Don’t get too attached to that money.” Leach felt the city should have put the money in the budget in the first place.

Milk and city staff are now pursuing a new interlocal agreement to re-open the court. Last word will require a city council vote. Milk’s final concern is now whether revamped public courts will pull membership away from the city racquet center. “If the racquet membership goes down I’ll have a new category of heartache.”