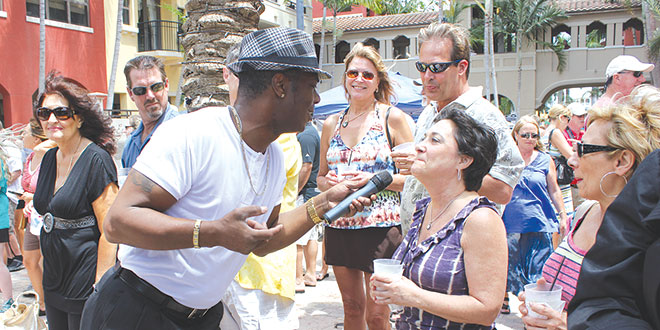 The Greg Miller Band will wow the Taste of Marco once again this year. SUBMITTED PHOTO

A day of food, music and fun awaits at the 24th Annual Taste of Marco, Sunday, May 4, 11 AM-5 PM. Come stroll through The Esplanade to sample the flavors of some of Marco Island’s favorite culinary hot spots, including Beachdogs, CJ’s on the Bay, Gino’s Trattoria, Coldstone Creamery, Quinn’s on the Beach, Chop 239, Verdi’s, Mango’s Dockside Bistro, Porky’s Restaurant & Lounge, Vandy’s 5 Brothers and Starbuck’s.

A major draw for music lovers again this year will be The Greg Miller Band. Miller has opened for such R&B greats as for Kool & the Gang, Lionel Ritchie and Al Green. He led his own band — Reflex — on a European tour and appeared on German TV and radio. He won “Best International Singer of the Year” in Germany in 1997.

Fans of Motown, Swing, Disco and R&B alike will delight in The Greg Miller Band’s personable, fun, crowd-pleasing entertainment style. The band hits the stage at 12:15 PM on Sunday and will play until 4:15 PM. The Greg Miller Band is performing at Taste of Marco thanks to BMO Harris Bank located at The Esplanade.

To learn more about Greg Miller, go to www.gmproductions.biz, and for more information about the 24th Annual Taste of Marco, call 239-394-3144 ext. 205. All proceeds from the Taste of Marco benefit the Greater Marco Family YMCA.