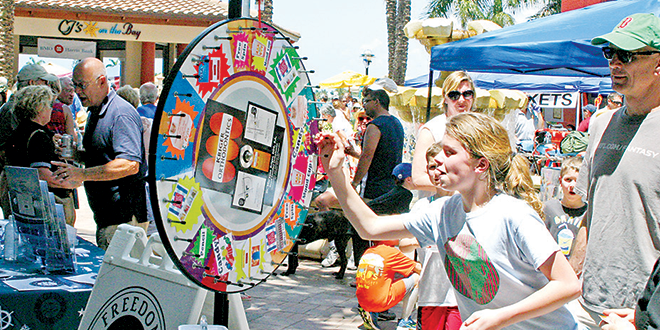 Scott Cutting was the picture of relaxation as he sat in the midst of a high-spirited scene at the Esplanade Shops. The Marco Island resident was, for the first time, taking in the sights, sounds, aromas and tastes of the annual Taste of Marco fundraiser, which brings an assortment of the city’s restaurants and food vendors to the Esplanade courtyard to show off their wares. Cutting, who moved to Collier County eight months ago from Rhode Island, was impressed with all that his senses experienced on April 12. “It’s a wonderful, entertaining event,” he said. “It certainly gives you information about the venues available on Marco Island.” Taste of Marco features live entertainment, children’s activities and of course, myriad varieties of food, food, food. Started in 1986, the event serves as a fundraiser for the Greater Marco Family YMCA. This year’s version included a children’s play area, an ice sculpture demonstration and music from D.J. Steve Reynolds, musician Kirk McFee and the band, “The Manipulators.” Participating restaurants included CJ’s on the Bay, Kretch’s, the Marco Island Marriott’s 400 Pazzi’s, the Marco Island Hilton’s Paradise Café, Mango’s Dockside Bistro, Verdi’s, Gino’s Olde Marco Trattoria, Chop 239, Marker 8.5, Philly Grille, Nico’s Kitchen, Sale e Pepe, Sami’s Pizza Grande, the Summer Day Market, Stonewalls and Susie’s Diner. They were joined by food vendors Starbuck’s, Publix, Kirk’s Coney Island Dogs and Coldstone Creamery. Like Cutting, Sami Rahman’s business, Pizza Grande, located off N. Collier Boulevard in the Kwik Stop convenience store, was making its Taste of Marco debut. Before dashing off to serve more customers, Rahman offered up a rapid, ‘Yes sir,’ when asked if he was happy with his decision to take part this year. Also making its inaugural appearance at the day-long festival was Nico’s Kitchen, a Naples based, one-year old business that is eying the Marco Island market. Nico’s specializes in Greek cuisine, “with a side of barbeque,” according to the business card of Nico Lafakis, who co-owns the business with his wife Laura. “We wanted to expand our market, said Nico Lafakis. “We do gourmet meal deliveries and we want to start offering that down here.” Nico Lafakis was impressed by Taste of Marco. “I think things are going really great,” he said as he and his wife dished up their creations for customers. “This is the best organized event we’ve been a part of.”

Cindy Love, the Y’s CEO, was also pleased with Taste of Marco 2015. “The weather was a little warm compared to other years, but we had a fabulous day,” said Love. “The restaurants that participated were really into the spirit of the event, which really made it more fun. They decorated their booths, they were doing skits. I just thought the whole spirit of things was very upbeat and with just a real community feeling.” She also contributions of the event’s organizing committee, particularly the group’s chairman Allyson Richards and Tiffany Holmuth, for its success. This was the third year that Mango’s Dockside Bistro, located in the Esplanade, has taken part in Taste of Marco. The restaurant is owned by long-time Marco restauranteurs Rick and Anne Feinman, and their daughter Lauren. Lauren Feinman said the family’s history with the event goes back about 10 years, to when her parents owned the now-closed Chef’s Express. Lauren Feinman said Taste of Marco enables restaurants and food vendors to reach potential new customers. “One of the things we’re known for is our food presentation,” she said. “So it’s fun to put our dishes out there for people to see.”