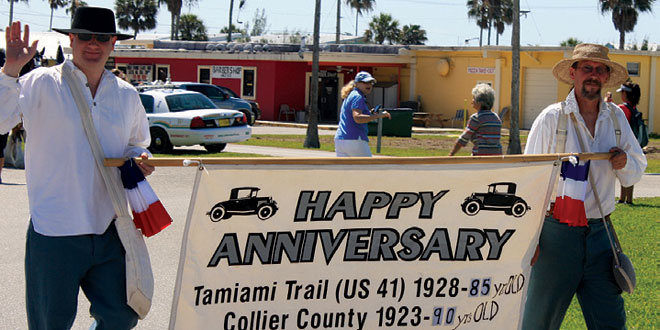 Upon its completion, the Tamiami Trail was touted as the “Eighth Wonder of the World.” Barron Gift Collier, for whom our County is named, and D. Graham Copeland, for whom the town is named, were the men behind the incredible engineering feat. Since the completion of the road in 1928, motorists have been able to travel from Tampa to Miami, thus the name, with ease. Celebrating its milestone birthday, Everglades City threw a party worthy of the road that forever changed travel in Southwest Florida.

Prior to the road, boats were really the only form of transportation either through the swampland or along the coastline. The timing was also perfect as the automobile was becoming more of a necessity and less of a prized possession.

Originally, the Tamiami Trail started out of Miami in 1917, but the project was incredibly difficult. Underneath the swamp was limestone which required massive effort to remove.

The Barron Collier High School Band put on a magnificent show for the crowd just as the Opening Ceremony began. PHOTOS BY NATALIE STROM

Mosquitoes and heat made the work even more difficult. It took five years to make it 50 miles before the Chevalier Group went bankrupt and abandoned the project.

Barron Collier came along and offered to finish the road if the state would name a county after him. After all, he owned thousands of acres of land which soon did become Collier County.

Collier began his side of the trail in Fort Myers, with crews using 40,000 pounds of dynamite for every mile of road. The trail was the largest consumer of dynamite at the time. It’s been said the amount of dynamite used would stretch from here to California.

The Walking Dredge was invented and its capabilities were what built the trail. A modern marvel in its own right, the dredge dug up the dynamited debris, dumped the dirt onto the future road and then “walked” forward. While Collier didn’t invent the dredge, he did 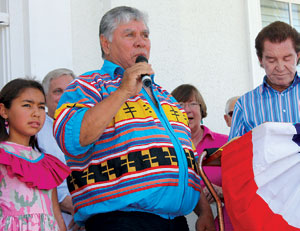 invent the idea of putting line markings on the road, which we still see on every roadway today.

And so, the road is certainly worthy of celebration. So much so, that a whole day in the Everglades was planned around it. The day started with a Pancake Breakfast, followed by a parade around the town circle and a beautiful Opening Ceremony in front of City Hall.

The day was hosted by The Friends of the Everglades Museum. Ron D. Jamro of the Collier County Museums was the Master of Ceremonies, who introduced Everglades City Mayor, Sammy Hamilton, as one of the principal speakers.

“I want to welcome everyone to what was the first County Seat, established in Collier County in 1923. Our City Hall building was completed as the first Collier County Courthouse in 1928 – the year that the Tamiami Trail was also completed… We are here today to not only celebrate the anniversary 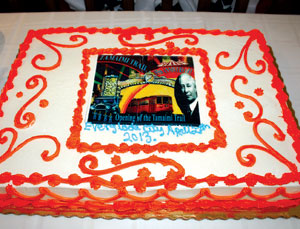 A grand cake for a grand celebration.

of Collier County, the Tamiami Trail and the museum, but also the 60th Anniversary of our beautiful little city, the City of Everglades. I am proud to be the Mayor of this great city for over 20 years and we continue to honor and appreciate our heritage.”

Mayor Hamilton then called up Chairman James Billie of the Seminole Tribe of Florida to say a few words.

“There used to be legends and stories I heard about the Tamiami Trail; how the white man got together and they made that trail. Why was it so important? Because people needed to travel across the Everglades,” stated Billie. “But for the Indians, it was important for them because they could find a dry place to put their chickee huts on the overburden of the road! To this day, if you travel along the Tamiami Trail, you’ll see Indian Villages along that road. That was probably, on the 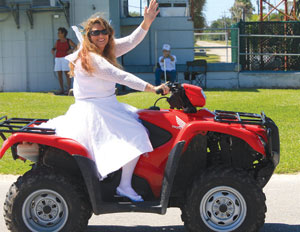 Martha Hutcheson as the “updated” fairy on the horse from the original parade.

humblest note, the most miraculous things the Indians could find. The rest of the time they were out in the Ten Thousand Islands trying to make a living or even just trying to survive. So when I heard there was going to be a celebration, I slapped a pair of shorts on and got over here, Sammy.”

Dressed as Tommie Barfield, Betsy Perdichizzi, read the speech delivered by Barron Collier on the day of the opening of the Tamiami Trail, in 1928. “Today the eyes of the world are focused on Florida. And the world sees the completion of the greatest highway that this splendid peninsula has ever possessed – not only for its value to the millions of people who will use it but to the entire population of Southern Florida… The Tamiami Trail is finished. The impossible has been accomplished. It couldn’t be done, but Florida did it.”

Present for the Opening 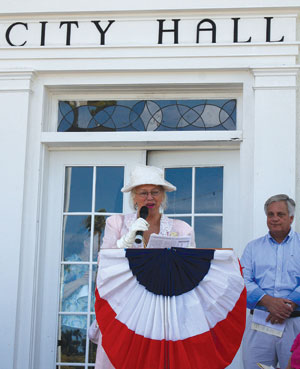 The day continued on with a barbeque and fish fry, arts and crafts fair, guest speakers, guided tours of the city, old timers’ storytelling, a birthday cake ceremony, afternoon tea at the historic Rod and Gun Club and ending with a movie and popcorn at the Community Church.