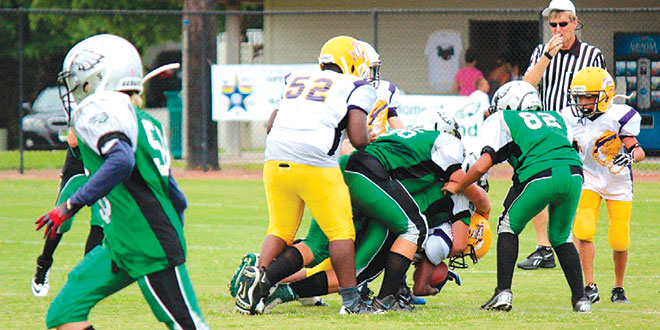 U-12 player Jackson O’Shea and Stuart Endres bring down the Tiger football runner.

Since 2008, the Optimist Club of Marco Island has worked to bring out the best in kids by providing them with an opportunity to participate in a variety of sports, including football, cheerleading, basketball, soccer and lacrosse.

In August, the club suffered a disappointment when it was forced to cancel its fall youth football season. During previous seasons, the Optimist Club had more than 90 combined registrants for its tackle and flag football programs, and has held various skills and training camps geared towards football throughout the years.

According to Samantha Morris, president of the Optimist Club, the season was canceled for two reasons. First, not enough players registered in the various age groups — U-6, U-8, U-10, U-12, and U-14 — to field a team in any one of the groups. Second, there was a lack of volunteer coaches to work with the teams.

“We just need a new director to breathe fresh air into the program and take it over,” she says. In fact, the Optimist Club currently is in need of program directors for both its football program and

the upcoming basketball program, which is scheduled to begin in February 2015.

These challenges are nothing new to Morris and the Optimist Club board, who also note that the increasingly busy nature of children’s scheduled activities and sport burn out also contribute problems in youth sport programs. As such, the club is looking for knowledgable, enthusiastic volunteers who know their sport and are organized and willing to volunteer their time to organize and direct these programs. Morris even sent out a mass email to parents and past volunteers asking them to help. With more than 130 participants in last year’s basketball program, she expects volunteers to step up soon for a successful season.

Morris admits that the volunteer program director positions are time intensive and require a commitment, but if the past is any indicator, someone will step up to the plate. “Individual sports directors as well as the board positions have historically been filled for a year or more and then that director or board member steps down and someone else steps up to take their place,” she explains.

“When you meet the kids playing

U-10 Tigers celebrate after a touchdown.

in the program and watch how much fun they have at games, it makes all of the time and work worth it to know that your efforts helped bring that child the joy of success in that moment. That’s what volunteer work is really all about,” Morris adds.

Despite these challenges, the Optimist Club is gearing up for a busy 2014-2015 filled with youth sports programs. Soccer clinics and kick arounds begin in September, and the Optimist Club’s recreational league will begin its season in November.

The fall cheerleading program will October-December, and be followed up by a spring program in February. A tentative spring football program is on the calendar for April and May. Lacrosse also will come back in January. New to the Optimist Club last year, Morris has great expectations for the upcoming lacrosse season. 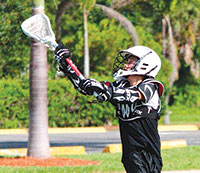 In the end, the Optimist Club’s key objective “is to bring out the best in kids by providing them with an opportunity to participate in sports,” Morris says. “We want to provide quality sports programs to kids that will enable them to have fun, work on their skills and teach them teamwork, dedication, honor, commitment and many other values that are learned through participation in team sports. We also want them to have an outlet for physical activity and all the energy that comes with being young.”

Moreover, she continues, “there are many children who want to be multi-sport athletes, and we are trying to position our programs so they are able to succeed in this and not be burned out by one sport.”

For those interested in the program director positions for football or basketball, know someone who may be interested, have children interested in playing youth sports on Marco Island or just have questions about the Optimist Club and its programs, please contact the club at president@marcooptimistclub.org or visit the web site at ww.hometeamsonline.com/teams/?u=mioptimist&s=org&t=c.