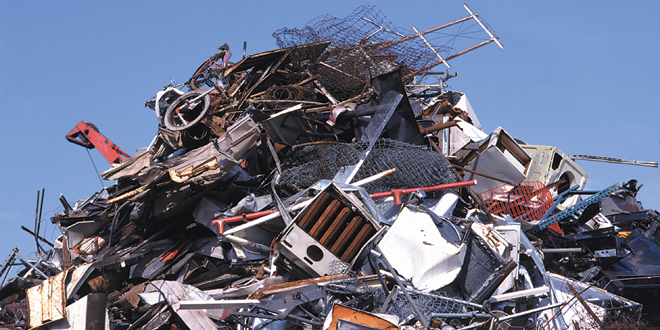 Monthly, different local groups and residents make the effort to organize and pick up trash on Marco Island’s beach. Weekly, we all make the effort to throw trash in the appropriate receptacle; the regular trash bin which goes to our overflowing county landfill or the recycling bin which keeps excess trash out of the landfill so that products can be repurposed and reused. Those are our choices at home and work. Daily, we pick up trash as we take walks in our neighborhoods, parks or on the beach. Trash; it is part of our life. We create it, dispose of it, pick it up and throw it away. Is it really out of sight and out of mind? Are we making the correct decisions?

Focusing on a more global look at the environment, not just what is on our island, it is apparent that our world is accumulating trash – toxic trash – at an alarming rate. The five major oceans of the earth have circular currents, or gyres, due to the earth’s rotation, causing clockwise currents and ever-changing weather conditions. These factors allow debris and trash to accumulate in flotillas or patches in the middle of the circulation of the gyres, much like soap bubbles and foam do in the middle of a Jacuzzi bath.

During the 2010 British Petroleum Deepwater (BP) Horizon Oil Spill, the Gulf of Mexico gyre was monitored closely – hourly – to predict where the oil plume would travel. Ultimately, the gyre was a large part of what kept oil from reaching the Marco Island beaches. This gyre accumulates debris, including the remains of that spill and will be monitored and studied for decades to come.

Alarmingly, in the Pacific Ocean, scientists have named an area of the North Pacific Gyre the “Great Pacific Garbage Patch” due to the accumulation of debris and trash, specifically plastic. The North Pacific Gyre is formed by four specific Pacific Ocean currents: the North Pacific, the California, the North Equatorial and the Kuroshio currents. There are two areas of vast accumulation of debris: the eastern and the western patches. The eastern patch is between Hawaii and California; the western is off the coast of Japan. The eastern patch, the Great Pacific Garbage Patch, has a high accumulation of manmade debris that cannot be seen by space, satellite, aerial photography, an airplane or by “Google Earth.” Most times, not even ships passing through the Garbage Patch can see it. Why? The accumulated, decomposing plastic is in the upper levels of the ocean’s water column, suspended just below the surface. The amount of plastic that has accumulated is significantly higher than average than the rest of the ocean.

There is argument about how big the Garbage Patch really is: the size of the Hawaiian Islands; of Maine; of Texas; or is it really twice the size of the United States? It is difficult to measure due to the vastness of the Pacific Ocean and the location of the patch of trash, as the edges of the gyre change with currents, weather, or the earth’s rotation. The depth of the decomposing plastic is unknown since comparison of toxic components to what should be clean ocean elements is, to date, impossible to measure scientifically. A study of the eastern gyre area by Scripps Institution of Oceanography / Project Kaisei SEAPLEX, in 2009, did find plastic marine debris of large pieces, but the area was largely made up of smaller items that increase in concentration toward the gyre center, with confetti- sized pieces clearly visible just beneath the ocean’s surface. There is agreement within the scientific community and conservationists alike, that it is out there and growing, affecting the health of the ocean and the health and documented demise of wildlife (Now, up to 267 species have been impacted, most of which don’t even live on or near the gyre). It ultimately affects the health of us, mankind.

From samples taken, the plastic marine debris found ranges in size from fishing nets, parts of containers, buoys, nylon line, toys and down to micro-pellets used in abrasive cleaners. Plastic photodegrades; it does not decompose like wood, paper or even metal-type marine debris. As it photodegrades, it disintegrates into ever smaller pieces while still remaining a polymer (manmade product). It will disintegrate to a molecular level, being ingested by marine organisms. As it becomes very small (confetti-like), marine animals ingest these plastic pieces, even feeding it to their young and thus, this plastic toxic trash has entered the food chain. To add to this dismal scenario, plastics that have photodegraded, leach chemicals such as PCB, derivatives of polystyrene and bisphenol A – all toxic to animals and humans.

This may all seem far away from our island paradise, but it is a global issue we all need to be conscious of: the use and disposal of plastic products. In the monthly, weekly and daily trash we encounter, how much of it is plastic? Do you think it never reaches our canals, rivers or beaches, ultimately ending up in the Gulf of Mexico? From surveys taken during the local monthly beach clean ups, more than 80% of all trash collected on the beach is a type of plastic – straws, cup lids, Styrofoam cups, water and soda bottles, bottle caps, wrappers from snack food, fishing line, plastic toys, sandals and flip flops; the list goes on and on. This is the trash – the toxic trash – which ultimately ends up in our local waters. Short term convenience of plastic containers is resulting in long term pollution that affects us all. Let’s all make a difference locally; manmade trash does not belong in our oceans and waterways. Remember to:

For more information on the Great Pacific Garbage Patch and the ongoing studies, check out www.marinedebris.noaa.gov/ info/patch.html