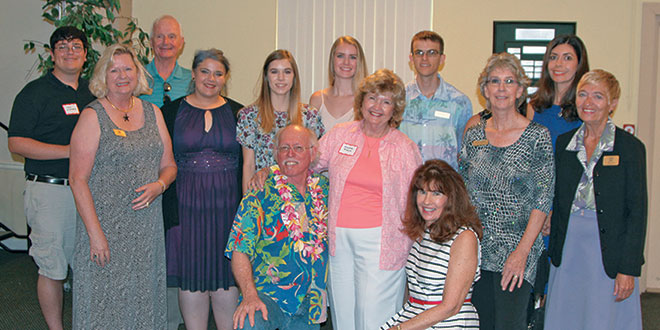 The scholarship recipients as well as members of MIFA and Artist of the Year, JRobert. Photos by Samantha Husted

On May 21st the Marco Island Foundation for the Arts (MIFA) held their annual Scholarship/Artist of the Year luncheon. This year longtime Marco Island musician JRobert Houghtaling was granted the title. The Foundation also distributed scholarships to seven local students who plan on, or are majoring in the arts.

This is the third year that the Marco Island Foundation for the Arts has given out scholarships and named an Artist of the Year at a luncheon. While the organization has been giving out scholarships for about eight years, the ceremonies were previously held at MIFA members’ homes. “We decided we wanted to do something where we could have friends and family come in and 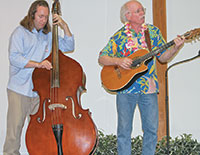 Martin Houghtaling and his father JRobert Houghtaling performed an original song for the group.

really enjoy this together,” said MIFA president Carolyn Burger. “We also wanted to name an Artist of the Year so that person could be an example to our scholarship winners about what they can achieve if they keep working hard.”

The scholarship recipients ranged from graduating high school seniors to juniors in college. Each brought with them their own artistic edge. Lely High School senior Emily Orgass, for instance, is an aspiring music education teacher. She performed a cello number for the group. Ashley Johnson, also a senior at Lely High School, played the piano and sang for the audience. Marco Island Academy senior Anastasia Baran said that she plans on majoring in Art and Photography 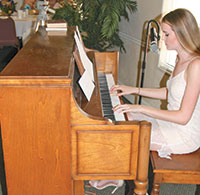 this fall at the Florida SouthWestern State College. Photographer Tyler Macdonald, who runs the Left Bank Art Fest at the Esplanade, also received the scholarship. Others included illustration major at Ringling College, Ted Schimek and Juliana Piscolli who will be majoring in Art Education at the University of Central Florida come June. Joseph Byrne, who couldn’t make it to the ceremony, is currently an acting student at the Columbia College in Chicago.

“Seven people applied and seven scholarships were awarded,” said Burger. “They all had wonderful credentials and we’re happy to have them.”

At end of the ceremony, JRobert was recognized as Artist of the Year. JRobert is a multitalented musician with a whole lot of energy. 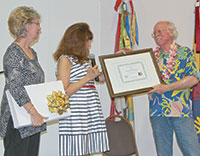 MIFA president Carolyn Burger presenting JRobert with his Artist of the Year award.

He writes, performs and produces his own music. He also plays the violin, guitar and steel drums. Each year he volunteers his time to perform at special events all over the Marco. It seems his music is all about the Florida lifestyle, focusing on Marco Island and the Ten Thousand Islands. He and his son Martin performed an original song and were received with a standing ovation.

“I have gotten to know JRobert so well in the last couple of weeks,” said Burger. “I find him to be such a fun guy who just loves to perform. He’s very interested in working with all the artists in the community. We just think he’s the perfect guy for the Artist of the Year award.”