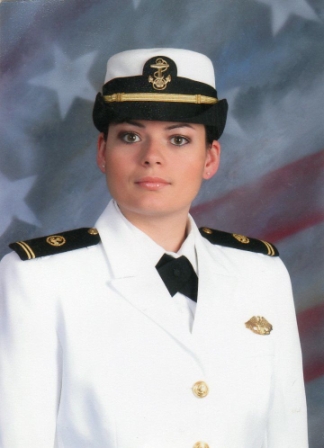 Gone are the days, it would seem, of stereotyped blustery Tugboat Annies(1933 movie with Wallace Beery and Marie Dressler) portrayed by women with weatherbeaten faces and few feminine characteristics.

Although running a chunky offshore vessel may not seem as romantic as wearing the nifty uniform of the captain of a swanky cruise ship and giving directions from a modern, glassed-in wheelhouse of a sleek ocean liner, those  working boats need to be reliable and so do their crews. Have you ever met any of them?

At this time of year when friends and families reunite, many young men and women who were students a few years ago return home as well-employed professionals. In this economy we celebrate their successes.

One such young woman is Brooke Plank, an alumnus of Lely High School. She went on to graduate from the U.S. Merchant Marine Academy, Kings Point, NY on June 16, 2008 with 213 members of her class, as Midshipman Brooke Dorothy Plank. The daughter of Larry and Nancy Plank, she received a Third Mate Merchant Marine license at the ceremony as well as a Bachelor of Science degree.

Brooke’s parents are active members of the Marco Island U.S. Coast Guard Auxiliary, Flotilla 95: Nancy was the 2008 Commander, and volunteers in recruiting and Personnel Services, while Larry is Flotilla Staff Officer in charge of Program Visitors. In the past, both have held many positions within the Flotilla, while Brooke has always been a contributing member as well, acting as the master of ceremonies for the Flotilla Change of Watch for many years.

Midshipman Plank was nominated to the Academy operated by the Maritime Administration of the U.S. Department of Transportation, by Senator Bob Graham. 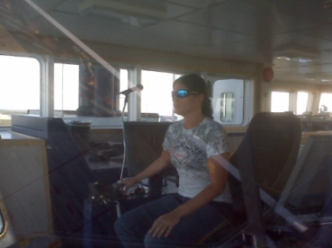 Brooke’s education, training, and determination took her to a position with the Otto Candies company, in December 2008, as mate to the captain of an Offshore Supply Vessel (OSV).

“This company seemed perfect for me because it felt as if it had more of a family orientation,” Brooke said. “To me as a female, that made my decision very easy to join their team. As of now, I am one of two females that sails for the company.”

She sails on a 265-foot vessel, with an all-male crew, with the exception of Brooke.  She says the men have always treated her as an equal or even as a little sister since she joined their crew.

“When I am on board my watch consists of 12-hour days,” she said. “My position is that of mate, which means I am responsible for carrying out whatever the captain may need.  Some responsibilities may be making sure the deck hands are doing what they are supposed to be doing, paperwork, inspecting any equipment on board the vessel, planning routes, or driving the boat.”

The vessel’s main purpose is to supply oil rigs with any supplies they may need such as tools, food, water, fuel, and sometimes even personnel transport. The boat’s main transit is from Port Fourchon, Louisiana to a rig located in the Gulf of Mexico.

We hope our readers will contribute similar stories and photos of young men and women who grew up on Marco Island and vicinity, attended local schools, and are now gainfully employed ‘somewhere out there’.
Please send your information to: Carol@coastalbreezenews.com