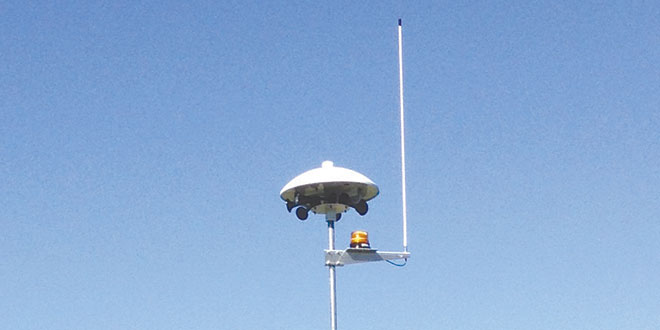 Southwest Florida has quietly moved into the ebb and flow of its traditional summer afternoon thunderstorm pattern. While the rain cools off the hot and steamy day, the thunder and lightning that go with it cannot be ignored.

Afterall, Southwest Florida falls within the states “lightning belt,” and can witness close to 350,000 lightning strikes each year.

The main sensor alerting station is located on the roof of City Hall. There are two remote stations at Mackle Park: one located at the far end of the athletic fields on your left when you enter the park and another located at the far end of the lake on the walking path near the water treatment plant that can be seen from the dog park. The last remote station is at Winterberry Park on the roof of the bathrooms. 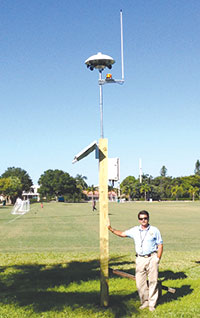 City of Marco Island Parks and Recreation Facilities Director Alex Galiana is seen here with one of the remote stations located at Mackle Park. SUBMITTED PHOTO

mushrooms — with a strobe light in the front work together. The System is active seven days a week from 8 AM-9 PM.

The Thor Guard Lightning warning system is a “prediction based” system as opposed to lightning “detection” system. The system predicts when there is a high probability of lightning within a two-mile radius of the main unit located at City Hall. If the system predicts a high probability of lightning within the designated radius, a one-time, 30-second blast of the system’s siren will sound, and a “Red Alert” flashing strobe will light.

When the system signals a “Red Alert” consisting of the 30-second sound blast and “Red Alert” strobe turning on, residents should immediately seek shelter.

When the “All Clear” is detected, the ”All Clear” signal is indicated by three blasts (each lasting 5 seconds) of the siren, and the “Red Alert” strobe will turn off.

• three short sirens and no strobe light = “All Clear”

You can check the system status from your computer or smart phone by visiting: