Swimming with the Largest Fish on Earth 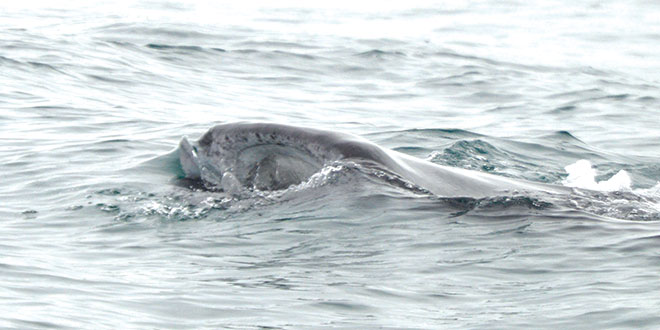 The mouth of this whale shark is nearly 4 feet wide. It filters plankton and small fish from the sea water to obtain protein. SUBMITTED PHOTOS

This column is dedicated to Marine Biologist James Livacarri, whose passion, knowledge and smile deeply in spire tens of thousands of visitors to Marco Island. May your seas always be calm, and may the road rise up to meet you. May all of your journeys be pleasant, and may you and your family remain continually blessed. Thank you, my friend!

I couldn’t believe my eyes! Our boat was right along side the largest fish in the world. The captain cautiously edged the vessel forward until we were about 30 feet in front of the creature, and then the cry rang out: “Team One, JUMP!”

With mask and fins already on and snorkels firmly placed in our mouths, three of us pushed away from the side. Our guide hit the water first and then my wife Cathy, a nurse at Physician Regional’s Marco Island Clinic and also a Master Naturalist, and I hit the water simultaneously. The school bus-sized fish was supposed to swim right by us so we could view it, but it turned……right toward me!

I saw this huge mouth, nearly four feet wide, coming straight at me. As it ducked under, I watched its spotted head go by

You can see the spots on the head and back of this shark. Just like dolphin dorsal fin markings, the spot patterns behind the gills of the whale shark are its fingerprint.

and looked up just quick enough to see the dorsal fin right in front of my mask! I turned my left shoulder and pulled my head back to avoid contact, and both the dorsal and tails fins came within inches of my face. What an experience to be that close to a whale shark!

Whale sharks are, indeed, the largest fish on the planet. The ones that I swam with were 20-26 feet long and weighed several tons. They can reach lengths up to 40 feet and weigh about 5 tons. They are not whales; they are sharks. Whales are mammals and breathe air. Whale sharks, so named because of their size, have gills like other fish. They are “filter feeders,” which means they extract plankton, eggs and small fish from the water as it comes into their mouths, and they take in tons of water.

We were diving in the northeast corner of the Yucatan Peninsula, where the Gulf of Mexico meets the Caribbean Sea. The whale sharks are here as part of their annual migration, and hundreds of these gentle giants come from a variety of locations to feed in a plankton saturated stretch off this coast of Mexico. More 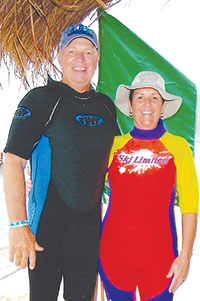 Bob and his wife, Cathy.

than 800 of these sharks will pass by this feeding ground between May and September. Some will migrate thousands of miles.

There are about a dozen feeding grounds around the world that could attract these creatures from western Australia and Indonesia and Belize. This time of year, they are in the waters off Mexico’s Quintana Roo state.

Scientists are just now starting to see the results of years of research, and are finding that from this one feeding area some of these tagged animals have spread throughout the Gulf of Mexico, down into the caribbean Sea, through the Straits of Florida and up into the Atlantic Ocean.

Several research groups are finding something odd about the Mexican population. Of the whale sharks studied in this area over a period of years, 70 percent of them are male. So where are all the females? Other global groups are showing the same gender imbalance. Quite obviously, you can’t have a stable population with that many males. The females have to be somewhere. The answer may lie in the fact that no birthing area has yet been discovered, and since these feeding grounds are in coastal waters, where other predators could attack the newborn whale sharks,

Bob swims as fast as he can to stay in range of this one. Its tail fin is closest to him, then the dorsal fin. This whale shark was about 20 feet long.

it is possible that the females have found an area in the ocean more suitable for raising young — an area not yet known by man.

Finding this birthing region would mean much more than a pin placement on a map. It would allow for a much greater understanding of whale shark behavior. So much is yet unknown about the largest fish on the planet. We need another stepping stone to help complete this puzzle.

The groups on our boat experienced four dives on June 6.

That first experience, as mentioned above, was surreal. During the second dive, I found myself swimming as fast as I could just to maintain a glimpse for a few more seconds. The final dive of the day surprised everyone. A whale shark simply came to a stop, and everyone in the water got a great view of this fantastic being.

It was an experience and an education in marine biology that I will never forget. My hat is off to all of the scientists and biologists who passionately pursue their dreams.

Bob is the owner of Steppingstone Ecotours and also a member of the 10,000 Island Dolphin Survey Project. He has just been selected to join Leadership Marco’s 2014 team. Bob loves his wife very much!