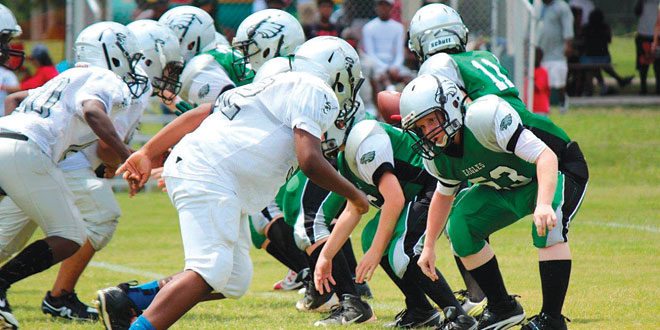 The Southwest Florida Youth Football League closed out its short but exciting spring season with the Marco Island Eagles playing against the South Naples Pirates at Eagles Lakes Park.

The young U-6 Eagles landed on the ground ready for a tough match against the Pirates team. The U-6 Eagles team played hard against the Pirates and were able to score first and took an early lead in the game, but the Pirates were quick to come back and put the Eagles down by a touchdown going into the 4th quarter. As the Eagles got control of the ball, with less than two minutes left in the game, they started to move the ball down field and with less than a minute to go in the game. The ball crossed the goal line and the game was tied. The time on the clock had run out but the extra point attempt had to be played. The youngest eagle team tore down the mast of 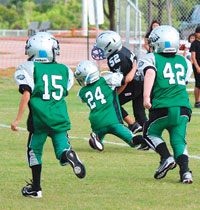 U6 Team – the youngest. Submitted Photos

the Pirates’ ship and ended the game with a victory, the final score being 13-12 Eagles.

The U-10 and U-12 teams also played this week against the South Naples Pirates but the outcome that was in the Eagles favor for the younger team would be much different for the older teams. As the two older Eagles teams played, it was clear early in both games the teams were facing rough seas ahead and the Pirates had their sea legs firmly on the ground and were abler to score against the Eagles. After a rough battle for both teams, the final score of both games reflected that the Pirates would rule the day but no quarter was given The Eagles teams both closed out the spring season with a loss.

Over 500 athletes and cheerleaders participated in the Southwest Florida Youth Football League inaugural spring season. Without the great support of parents, coaches, volunteers and players this would have never happened. Thanks goes out to

all that made this Spring possible. We are excited about what the Fall season has to bring!

With the start of the first Fall season just around the corner and the addition of three new teams (Golden Gate Tigers, North Naples Lions and Dunbar Rattlers) to go with the four current teams, we are poised for a great first season. The SWFYFL will have a Jamboree to kick off the pre-season this August, a full schedule of regular season games and playoff and championship games to cap off the regular season. Additionally, we will have three FBU National Championship teams comprised of many of our 6th, 7th and 8th grade athletes to participate in the FBU 64 team national tournament, better known as the “Little League World Series of Football.” Rounds 1 and 2 for this tournament will take place in Naples. Stay updated with more on this year’s Fall schedule and all our exciting events by “liking” our Facebook page and joining us on Twitter.