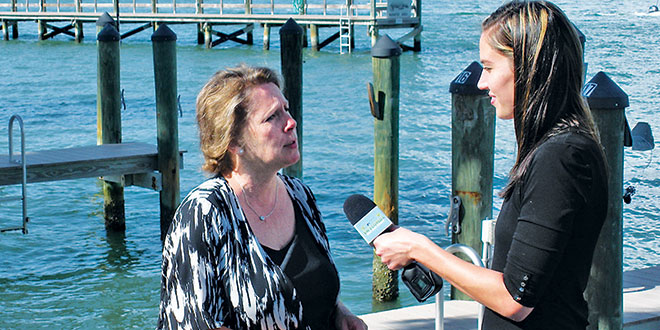 Susan Ackerson is serving a second time as president of the MIAAOR. PHOTOS BY DON MANLEY

Susan Ackerson is stepping back into a familiar role as the president of the Marco Island Area Association of Realtors for 2015.

However, the picture for real estate is much brighter as compared to her tenure in 2010, when a recession, foreclosures, short sales and the BP Oil Spill in the Gulf of Mexico sent home prices plummeting.

“I think this is going to be a fantastic year for real estate sales,” said Ackerson. “I have never seen so many people here as I do now. All segments of the market, condominiums, houses, lots and new construction, are doing well and I expect we will see a banner year. The strongest sales are in single-family, waterfront homes (with prices) approaching the ($1) million dollar mark.”

This is the second time she has served as MIAAOR president. Ackerson stepped into the breach when there were no volunteers to be nominated for the post back in 2012, when the presidency term was still four years long.

“I did not seek out the opportunity to lead the association a second time as its president, but I was asked to do it again,” she said. “The pledge we take as realtors states that if asked to help, we answer with a willing heart. So, here I am again. One of my goals this year is to nurture future leaders to ensure that we have new leaders in the future.”

Ackerson is the broker-owner of Anchor Real Estate, which has about a dozen realtors. She has been a realtor for almost 30 years, beginning her career in her hometown of Mahwah, N.J. Ackerson, her husband Tom and their son Tommy moved from Mahwah to Marco in 1989, and she got her Florida real estate license in 1991.

Her first jobs were on her family’s farm, planting and picking vegetables. She received a degree in business administration from Ramapo College in New Jersey in 1981 and then became a staff accountant for a travel agency. Ackerson worked there until her son’s birth in 1984. It was during that time that her family was involved in several real estate transactions, deals that whetted her appetite for the 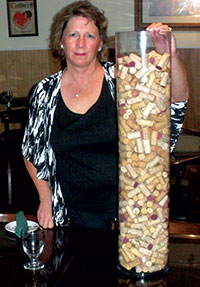 “After that experience, I thought this is something I would like to try to do part time,” she said. “I quickly learned that there is no part time in the real estate business.”

Ackerson enjoys being a realtor because each client presents a unique challenge when it comes to finding the best property to match their circumstances. Marketing is another aspect of the business that she relishes, and she readily employs videos and on-line tools, as well as television in assisting sellers and potential buyers.

“I am regularly featured on ‘Out & About SW Florida’ on Sunday mornings on WABC Channel 7 at 11:30 AM,” said Ackerson. “I showcase Island properties and the Marco Island lifestyle in two-to-six minute segments that are aired from Key West to Sarasota, reaching over 100,000 viewers. I like to show just how much fun can be had on Marco Island in these shows.”

Fostering increased community involvement among her fellow realtors is another of her goals for 2015. Ackerson volunteers with Meals of Hope, which combats hunger in Collier County. It was that association that led her to form “Korks for Kids,” which collects used wine corks that are sold on eBay for use in craft projects. All the proceeds from the sales are donated to Meals for Hope.

The collection point for “Korks for Kids” is the Old Marco Pub & Restaurant, located at 1105 Bald Eagle Drive, which Ackerson and her husband own and operate and where their son Tommy serves as bar manager.

“I am hopeful that we will raise a couple of thousand dollars this season for Meals of Hope with our ‘Korks for Kids’ project,” she said. “More and more people, other restaurants and civic groups have been saving wine corks and dropping them off at the Pub. Cork sales are up on the eBay site set up for me by the Meals of Hope leaders Neil Snyder and Eric Condee. It only takes a couple of corks to feed a hungry child. I hate to see corks get thrown away when people will pay money to buy them so they can use them in craft projects. Everyone wins with this project.”