Surviving Year-Round in a Seasonal Town 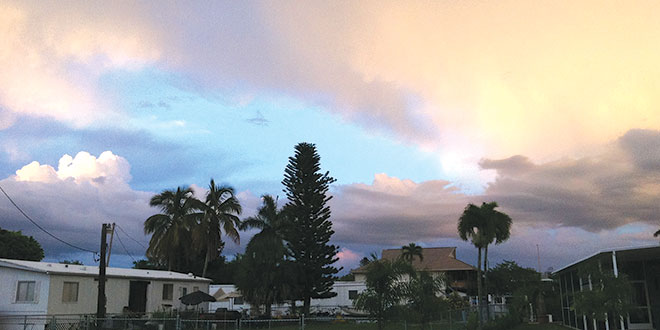 Blue sky to the north and a mean storm rolling in from the south came together to pose for a beautiful picture.

The term “summer doldrums” is new to me, but apparently it describes what I’ve been experiencing but successfully fighting off. How does a person of modest means ensure survival when home is a place that lives and dies by the season? I admit, I’m no expert, but this Ohio girl is trying to quickly acclimate to her new home, and I’ve learned a few things along the way.

When I think of survival, I think of basic necessities: food, clothing and shelter; but finding ways to combat boredom and enjoy life are equally important. Having money helps make survival and enjoyment possible. As thrifty as I try to be, my outgoing financial responsibilities always seem to exceed the money I bring in.

In addition to writing, I work at Corey Billie’s Airboat Rides, and 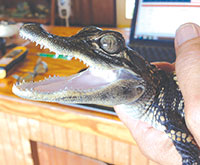 The smallest baby alligator at Corey Billie’s. I named him Ducky.

I’m hoping to take on a third job for next season. I’ve never been one to save for a rainy day —something I now take literally — but I plan to squirrel away as much as possible in preparation for next summer.

A survival strategy that my current budget allows: taking joy in the little things. When life slows down, the little things stand out, and they make for a constant source of free entertainment.

I’m used to living in the epicenter of what’s happening in America. After all, Ohio’s motto claims it to be “the heart of it all,” but here it feels like weather news is the only news that directly affects me. Somehow, southern Florida’s weather manages to be spontaneous and yet predictable at the same time. I take pictures of everything to ensure the inevitability of catching an impressive shot now and then, and this time

Hands down, the best lightning photo I’ve ever taken. PHOTOS BY MELINDA GRAY

of year is proving to be very photogenic.

High tides are getting higher as we get deeper into the summer, and while I love the excitement of dodging saltwater puddles on my way home from work, it makes roadside landscaping near impossible. In February, I inquired as to why the vegetation along San Marco Road looked like it had been beat into submission; I was told that it’s necessary to keep it from gobbling up the road. In recent weeks, that same plant-life I once pitied has indeed started reaching its green fingers toward traffic, as if it were on steroids.

We’ve had an “el Niño” of tourism this year as a result of Marco Island’s award-winning beauty, and as an unexpected result, the long lines at Publix have not receded. Pool noodles, sun block and bug spray continue to fly off of the shelves.

This is the time when a 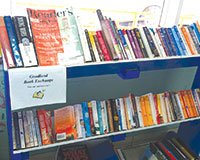 The Great Gatsby and Atlas Shrugged are two of my favorite books, and I found them both here in Goodland’s post office.

lot of businesses shut down for a break, and the ones that choose to stay open slow substantially. Here in Goodland, The Old Marco Lodge, Marker 8.5 and Stan’s are still pulling people in on any given day of the week, and I’m still left wanting for a place to sit at the bar on Sundays.

Boredom and hellish heat make this the perfect time of year to enjoy a good book in a cool place, and the book-share area at the post office has grown. I read a lot, but haven’t had a new book to read since December. Now, there are so many more titles to choose from.

For me, northern summers saw snowbirds returning home in flocks from their winter migration in the South. While the slow, cold winter months offered a break from the crowd, harsh weather conditions weren’t exactly optimal to enjoying one’s surroundings. Braving 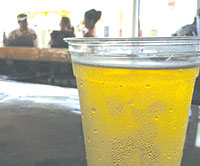 a blizzard to go on an outdoor family adventure isn’t advisable.

On the contrary, getting in touch with some of SWFL’s nature only requires a portable source of drinking water and a talent for having fun while slow-roasting. It hasn’t been hard for me to keep busy. Watching alligator babies grow; training a stubborn puppy; watching Netflix; and annoying native Floridians with my enthusiasm for inclement weather are just the tip of the iceberg. I’m already devising my full-proof plan to combat next year’s summer blues. What can I say? I’m a Virgo; even if I have nothing else, I will always have a plan.