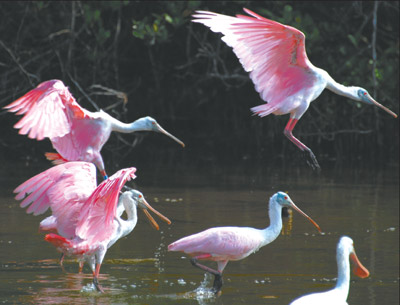 On Monday, May 14th, a flock of over thirty Roseate Spoonbills were seen foraging in the mangrove die off area along State Road 92.

On a sunny morning in mid-May, a few lucky onlookers witnessed a flock of at least thirty Roseate Spoonbills wading among the mangroves along State Road 92. The sighting was incredibly rare for a number of reasons. The bright pink birds were brazenly wading near the noisy, 45-mph roadside that connects Marco Island to the Goodland Bridge. The area, just east of the Steven’s Landing development, is also currently undergoing a restoration process, as over 225 acres of mangroves are dying at that location.

To learn more about these awe-inspiring birds and what constitutes a healthy habitat for them, Coastal Breeze contacted Dr. Jerry Lorenz, State Director of Research for the Audubon of Florida. Dr. Lorenz currently studies the Roseate Spoonbill, focusing on how water management “impacts the Spoonbill from the bottom up.” Known as the Florida Bay Estuarine Research Project, Dr. Lorenz’s field work studies linkages between fresh water intake into Florida Bay and how it affects plants, prey fish and the Spoonbill.

Dr. Lorenz conducts his studies through The Florida Audubon Tavernier Science Center on Tavernier Key, just south of Key Largo. His studies follow in the footsteps of Robert Porter Allen, the first Director of Research for the National Audubon. According to the Florida Audubon’s website, in 1938, “Allen began a full-time study

The Roseate Spoonbill is named for its sig- nature color and rounded beak.

of the Roseate Spoonbill, living among them in a tent for weeks at a time. At the time, scientists would typically

study birds’ eating habits by killing them and examining their stomach contents. However, the Spoonbill was so scarce by this time, Allen had to find another way to study them. His research changed how scientists studied birds and began 65 years of data investigating the Spoonbill and its habitat.”

During the plume hunting era of the late nineteenth century, Roseate Spoon- bills, Snowy Egrets, White Ibises and more were killed throughout the country to create elaborate feathered hats for women. “Between 1890 and 1905, the population of many wading birds, including the Spoonbill, was simply extricated from Florida. By the 1930s there were no nesting Spoonbills in the state,” explains Dr. Lorenz. “There were only a few young birds or non-nesting adults that started to migrate from Cuba or the Bahamas.” The National Audubon Society fought to protect many of these birds, winning the battle in the nick of time.

“The first record, post plume hunting, of spoonbill nesting, was in Florida Bay and there were only five nests.” In order to save the Spoonbill in Florida Bay, “Audubon basically hired wardens to sit there and make sure nobody disturbed these birds. From that point on, they started nesting 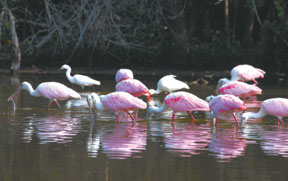 successfully and the population grew.”

As described by www.floridabay.org, the Bay is, “located at the southernmost tip of the Florida Peninsula. Florida Bay lies between the mainland and the chain of islands known as the Florida Keys. It is an area where fresh water from the Everglades mixes with the salty waters from the Gulf of Mexico to form an estuary that is surrounded by mangrove forests and encompasses over 200 mangrove islands.

Its nearly 1,000 square miles of interconnected basins, grassy mud banks, and mangrove islands are nesting, nursery, and/or feeding grounds for a host of marine animals,” such as the Spoonbill. For nearly 75 years, the Roseate Spoonbills have been protected throughout the country and have been continuously studied in Florida Bay. The intimate study of these birds has offered unique insight into their habits and habitat.

The Spoonbill’s diet is of particular interest. “There are six species of Spoonbills, globally. The Roseate is the only one that’s pink and the only one that’s in the New World. All studies done on these birds in- dicate that the vast majority of their diet is fish. The specific design of their bill is to catch fish, not crustaceans. This means that Spoonbills remain pink even if they eat a diet of 100 percent fish. They are not like Flamingoes, 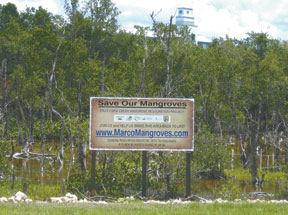 Known as Fruit Farm Creek, the 225 acres are in desperate need of restoration.

who have to get carotene from their prey. They have to eat crustaceans for that, but Spoonbills produce their own carotene. It’s just a matter of evolutionary design,” explains Dr. Lorenz, debunking the myth that Spoonbills are pink due to their diet.

Spoonbills feed in open, shallow ponds, dragging their rounded beaks along the bottom of these basins in search of small prey fish that hatch within the mangrove systems of South Florida. “Without mangroves, the productivity of the fish that they eat would be much more sparse,” adds Dr. Lorenz. “What we’ve discovered is that about 90 percent of Spoonbills will return to the approximate location, if not the exact location, from where they were hatched to begin building nests. As the young are produced they tend to stay in that same estuary, growing to adulthood and then producing their young there.”

Unfortunately, as habitat devastation occurs, these birds do not move on to a new location, but instead begin to die out as they do not have enough food to support their young. This became evident in the early 1980s in Florida Bay as poor water management began pumping large levels of fresh water into the Bay. “From 1935, we saw a steady increase through the years, up to about 1,260 nests in the late 1970s. In 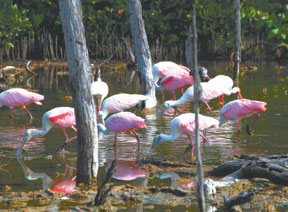 As the mangroves continue to die, these Roseate Spoonbills will find it more and more difficult to find prey fish.

the early 80s there were pumps put into the canal system, allowing the water managers to fully control water flow. The end result was highly detrimental to Florida Bay. Beginning in 1982, the numbers (of nests) started to go down. They went from 1,260 to 87 last year. This shows you that the water management practices that adversely affect the Bay result in much less prey fish. The Spoonbills find it much harder to collect enough food to raise their chicks.”

Roseate Spoonbills do not reach sexual maturity until they are three to five years of age. Typically laying three eggs per nesting season, their chicks will grow to the size of an adult within eight weeks. “So, you have three chicks that grow from the size of a chicken egg to the size of an adult in that short amount of time, which means the two adults have to almost constantly be bring food to the nest. If they don’t find that food, the chicks do not grow and they die.” 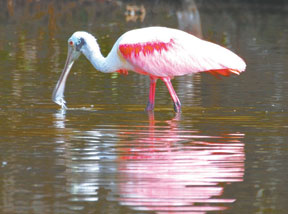 Spoonbills wade in shallow ponds in search of prey fish.

As the Roseate Spoonbill indicated overall poor health in Florida Bay, the Water Management District began working with the Audubon of Florida. As Dr. Lorenz explains, “the 2012 nesting sea- son, which just ended in April, had an increase from 87 in 2011 to 300 nests. My explanation is that beginning in 2005, the Water Management District began working with me and my crew to assess what was going on with the Spoonbills. They became very careful about not disrupting the food resources during the nesting season. This created four or five years of highly productive nesting. Those birds have now come into sexual maturity and have begun to nest. Based on all the data we’ve collected, that makes the most sense,” regarding the dramatic increase in Roseate Spoonbill nests.

While Dr. Lorenz researches Roseates on the east coast of Florida, he sees similarities in the Florida Bay habitat destruction and the dying mangroves that haunt State Road 92 on Marco Island. “Spoonbills basically need habitat. If you don’t have a healthy habitat, they won’t come. Restoring mangroves is always going to be beneficial to everything in our environ- ment.” 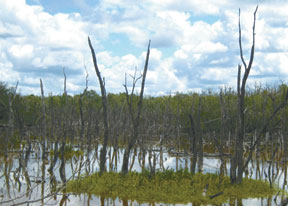 Phase I is underway along the north side of SR 92.

a 501(c)3 not-for-profit corporation. “Mangrove forests and associated tidal channels and submerged seagrasses are the lifeblood of marine life in Southwest Florida. An estimated 90% of all commercial and recreational fisheries depend on mangroves and estuaries during part or all of their life history. Without mangroves, the fish and shrimp and crabs that are food for many of our wading birds would be lost, and birds would disappear.”

Lewis has been working with Rookery Bay, The Conservancy of Southwest Florida and U.S. Fish and Wildlife for a number of years, attempting to fix the massive mangrove extinction on Marco. The first of a two-part phase is currently under way, but more funding is needed to finish the project.

Losing these mangroves means losing even the rare Roseate Spoonbill sightings that now occur around Marco Island. “The food base is probably severely limited in that habitat at this point in time,” adds Dr. Lorenz. “They are probably only going to go foraging in that area under ideal conditions. Whereas, if you had a healthy mangrove forest with some open spaces, during the dry season, those open spaces would be teeming with prey. If you’re coming to Florida to fish, see healthy beaches and wildlife watch, you have to have mangroves. The mangroves are what support these systems.”