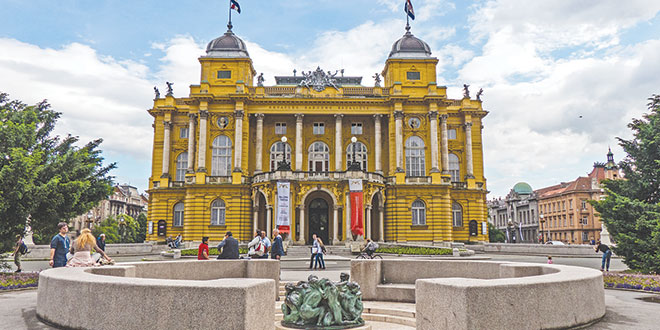 The National Theater in Zagreb. PHOTOS BY VICKIE KELBER

After reading about Zagreb in various guidebooks, I wasn’t expecting much, especially after spending a week in charming Dubrovnik. What a surprise! Zagreb is a great city! It is a city where the “new” town which is not all that new but very modern is more “happening” than the classic old town. Its cafe culture is unlike any we have ever seen and its indoor/outdoor market one of the largest. An important commercial center in Croatia, Zagreb is also very much a university city. It is a place where Franklin Roosevelt Square is not far from another named for Marshal Tito. Zagreb means “behind the hill” and is a reference to its location at the base of Mount Medvednica.

The somewhat sleepy old, or Upper Town (Gornji Grad), is quite compact. While there is a funicular that quickly whisks visitors to Gornji, the mild gradient up to it is not a difficult walk. Gornji is divided into two districts: Gradec, home to historic and governmental sites and Kaptol, the center of Catholicism.

Stone Gate marks the entrance to Gradec and is a popular shrine. Its passageway contains a painting of the Virgin to whom miracles have been ascribed. The shrine sees constant visitors as well as worshippers who come to give thanks, say a prayer in one of the small pews and light candles. A woman tends a constant “garden” of lit tapers in a metal bin which can be purchased. Marble plagues expressing thanks (hvala) adorn the walls. A visit to Stone Gate is solemn and poignant.

While the main cathedral is in Kaptol, Gradec is the site of the the iconic St. Marks Church. Located on a square ringed by administrative buildings including the Croatian Parliament, this rather simple church sports a colorful tiled roof displaying the coat of arms of Zagreb and Croatia.

Among the museums in Gradec is the quirky Museum of Broken Relationships. Winner of an award as “The Most Innovative Museum in Europe” in 2011, it invites people to donate personal belongings demonstrative of their

ruined relationships and contains such items as an axe, handcuffs, and a “divorce day” garden gnome, along with descriptors of the objects. Its cafe is a very popular stop for visitors.

If you are an aficionado of naive art as we are or even if you have no idea what it is, the Croatian Museum of Naive Art merits a visit. The small museum, the first one ever created solely for naive art, features paintings from the twentieth century.

Although the main museum devoted to noted Croatian sculptor Ivan Me‰troviç is located in Split, his former home and studio in Gradec is open to the public. In addition to displaying some of his work including sketches and small scale studies, the home and furnishings are well preserved.

Strossmayer Promenade provides a shady respite in the Upper Town. At its entrance is a terrace with panoramic views over the city. The Promenade has informal cafes and is a location were artisans often display their works and street musicians perform. It is particularly popular in the evening.

The spiral staircase of the Lotr‰ãak, or Burglar’s Tower, at the top of the funicular and entrance to Strossmayer provides a better panoramic view of Zagreb. Just avoid it at noon when a cannon is fired, a tradition that dates to the 1800s purportedly to allow for synchronization of clocks.

The cathedral and bishops palace of Kaptol is the largest Christian building in Croatia. Its towering twin spires are visible throughout the city. Seemingly in a constant state of restoration, one is usually ensconced in scaffolding.

Connecting Kaptol with the Lower Town is the terrace of the Dolac market. In addition to rows and rows of stalls covered by red umbrellas that have become a symbol of Zagreb and feature fresh produce and some handicrafts, there is an indoor fish market and underground indoor halls with more rows of stalls selling baked goods, meat, dairy products, eggs, wine, and honey.

The central square of ban Josip Jelaãiç marks the beginning of the Lower Town. Featuring a statue of Jelaãiç, a nineteenth century 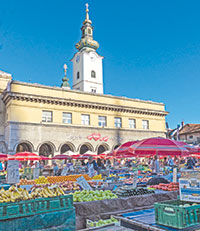 governor, the square is a busy transportation hub. Major stores and shops, businesses, and cafes line the streets leading off of it. Tkalãiç Street, once a stream dividing Gradec and Kaptol, is known as the cafe street due to its block after block of sidewalk bars/cafes. Unlike many cities, just about every one is truly a bar/cafe, not a restaurant. We walked for a long stretch and saw only two restaurants, although some of the cafes also served light snacks. The small Flower Square connects the cafe scene with the market scene and is home, to, you guessed it, the flower market.

Stretching out south of Jelaãiç square is “Green Horseshoe,” a u-shaped series of eight parklike squares that provide an oasis amid the bustle of downtown. Situated around or near these parks are major museums, including the Archeological Museum, Academy of Sciences and Art, the Modern Gallery, Ethnographic Museum, Arts and Crafts Museum, and the main art museum, the Mimara. At the culmination of the Green Horseshoe is a botanical garden.

The tram system in Zagreb is clean and efficient. As in most cities, you purchase your ticket either on the tram or for a slightly lower price at any of the “tobacco” kiosks called tisaks. Different from some places, however, is that to stamp your ticket, you must do so in a slot at one of the machines either in the first or last car. The machines in the other cars are for electronic passes.

The food in Zagreb is a mixture of Croatian and Italian, with some good fish restaurants. Decent restaurants can be found on the side streets other than Tkalãiç off of Jelaãiç square.

Easy day trips from Zagreb include the nearby tranquil Samobor with its charming main square and famous custard cake, the Baroque architectural delight of Varazdin, Tito’s childhood rural village of Kumrovec which has been turned into an ethno museum, and the stunning Plitvice Lakes National Park. Only two hours away, Ljubljana, the capital of Slovenia is also an easy day trip, but that city deserves a column of its own!