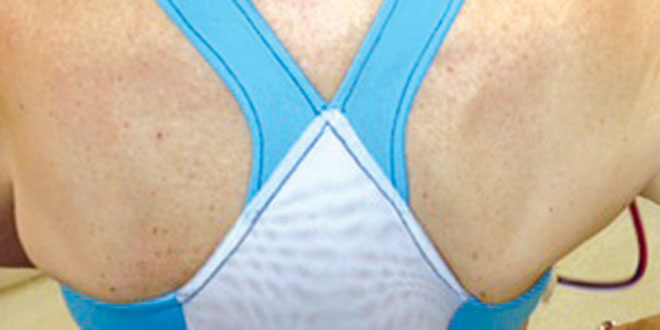 Women who undergo mastectomy, biopsy and lumpectomy surgeries use special bras after surgery to decrease swelling and promote healing, but after seeing her patients describe the bra as scratchy, uncomfortable and restrictive, Dr. Blackwell felt compelled to create a new bra in her spare time.

Ilona Martin was the first patient to try the bra. When she learned she had breast cancer for the third time in 2013, the fiercely independent 61-year-old feared that a double mastectomy would cause a burden on her family. She knew from her first bout with breast cancer in 2001 that the bra she received after surgery made it hard to move.

“The old bra is so compressed and tight, I could barely move my arms. At times, it took two people to close it. I felt really helpless with that thing,” says Martin. “Dr. Blackwell’s bra is useful and comfortable, plus it’s cut lower under the armpit

so it doesn’t interfere with the incision from lymph node surgery. It allows you to start physical therapy earlier since it doesn’t cut into it your arms. It’s not as restrictive and it really gives you your independence back.”

“Postoperative compression surgical bras are necessary to support the breast tissue after surgery, but they should be comfortable and functional too,” says Dr. Blackwell. “The bra I’ve designed provides the support needed, decreases bruising, fluid collections and provides patients less pain after their breast surgery.”

Dr. Blackwell has been working with a local seamstress to create her new bras, which have been increasing in demand. After receiving a U.S. Patent for the bra in July 2014, Dr. Blackwell is hoping to provide this bra to more breast cancer patients after mastectomies.

“I was delighted to be successful at navigating through the patent process and getting a patent issued for the postoperative compression bra,” says Dr. Blackwell. “If this bra could potentially make life better for women after surgery, then I’ve accomplished my goal.”

Dr. Blackwell’s bra is specifically designed for comfort. The older 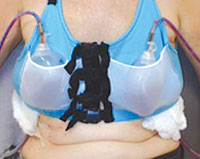 versions use Velcro, which can cause discomfort and irritation to people with sensitive skin. The old bra also has a seam down the front that comes right across the surgical scar, which may further irritate the skin.

Unlike other options, Dr. Blackwell’s bra uses adjustable clips that you would see on a life jacket or a stroller. It also has mesh pockets, where patients have the ability to put the post-surgery drain in the bra instead of clipping the drain to clothing.

“I was so impressed with Dr. Blackwell’s bra that I asked her to give me one for a friend going through the same ordeal,” says Martin. “My friend loved the bra and was just as impressed. Dr. Blackwell definitely made a difference in my healing process.”

Dr. Blackwell specializes in breast cancer treatment at Associates in General and Vascular Surgery, a division of 21st Century Oncology. She earned her medical degree from Louisiana State University in 2002 and completed a surgical breast oncology fellowship at Washington Hospital Center in Washington, D.C.