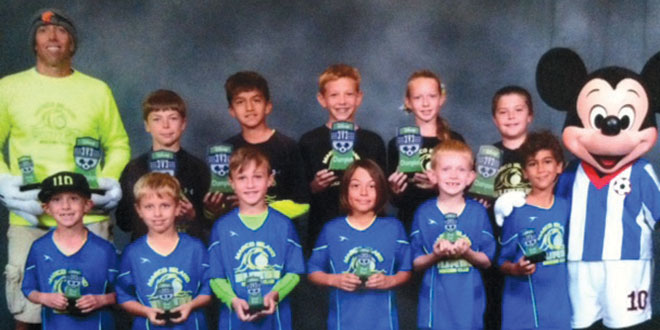 Surge U12 Boys (and Girl) and the U9 Boys take a trophy shot with Mickey Mouse. SUBMITTED PHOTO

After three days of games, the U12 boys (and one girl) won first place in the open division. The U9 boys and U15 girls also gave a great effort with the U9 boys finishing in the final four out of 22 teams in the Open Division of the ESPN 3V3 Championship — a great feat as most of the team is U8 playing up to the U9 level.

Trophies under the ESPN Globe for Surge U9 and U12 boys and girls.

years old. Headed by Coach Rob Stoutenburg, the academy focuses on teaching children the fundamentals of the game using techniques.

In February, the Surge U12 Boys Competitive Team headed by Coaches Mario Guzman and Mike Wesson will be travelling to the east coast to compete in the Weston Cup full-sided 11v11 division. In addition, several U8 and U10 Surge boys and girls teams are competing in the I-75 Shootout 6v6 division in early February.

Parents interested in their child joining the soccer academy should contact the Marco Island Soccer Club at 239-234-1575 or register online at www.marcoislandsoccer.org. Practices are held on Mondays and Tuesdays at East Naples Park and Wednesdays at Mackle Park. All kids are welcome.