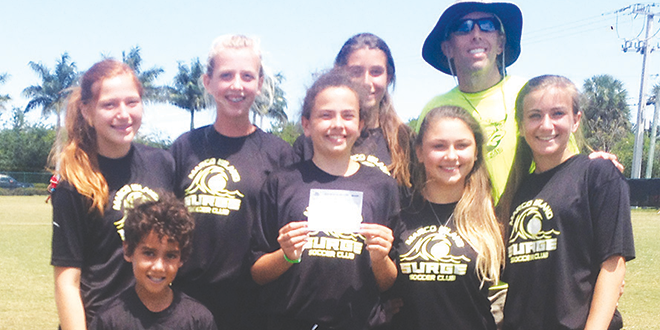 Seven teams from Marco Island Surge and the Golden Gate Eagles traveled to the East Coast to represent Collier County in the South Florida 3v3 Super Challenge Soccer Tournament. The U12 Surge boys, which includes Miss Kirra Polley on the roster, finished in Second Place in the U13 boys competitive bracket after a gripping championship match. The U9 Surge boys also finished in Second Place in the U10 boys’ recreational bracket after a great comeback to get to the championship match. The U15 Surge girls won their final game with a great effort in a very physical game to finish in Third Place, after being edged out of the championship on goal differential. The U14 Golden Gate Eagle boys won Third Place in the U14 competitive division in their first time playing 3v3 soccer. The U7 and U8 Surge and Golden Gate Teams also made a great effort in their first 3v3 soccer tournament of the season. The next 3v3 soccer tournament is in Bonita on April 25th. If you would like more information about how to sign up your child for soccer academy on Marco Island and East Naples, go to www.marcoislandsoccer.org, and in Golden Gate, go to www.goldengateeagles.com.