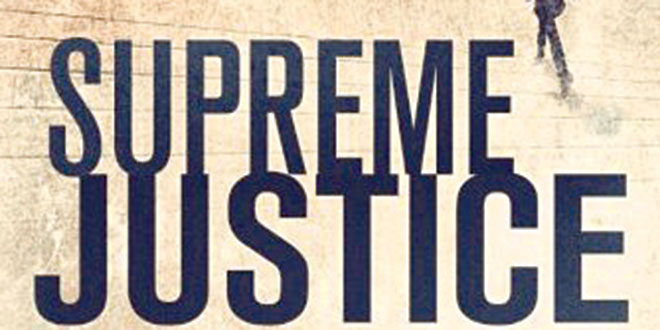 “I always turn to the sports page first, which records people’s accomplishments. The front page has nothing but man’s failures.”Earl Warren, 14th Chief Justice, SCOTUS

Someone is assassinating the justices of the Supreme Court in this nifty little thriller set in the future, circa 2030. “Summertime and the readin’ is easy” to paraphrase that famous Gershwin tune. “Supreme Justice” was quite a delightful surprise. I was hooked by the end of the first chapter.

Joe Reeder, CEO of ABC Security, is a former Secret Service agent who once took a bullet for the president of the United States, a man whom he personally despised. A month after his return to duty following extensive physical therapy, he put in his resignation, citing frustration with politics of the agency as the reason. Needless to say, this alienated him from pretty much everyone in the agency. Reeder is an expert in kinesics, reading people’s body movements and even their posture and facial expressions. He is drawn into the assassination investigation after a D.C. homicide detective phones him after the first justice, Henry Venter, is gunned down in the bar of a restaurant while having a drink with one of his law clerks. It is purportedly part of a two-man robbery spree which has plagued the surrounding area for a couple of months.

However, Carl Bishop, the DC detective, 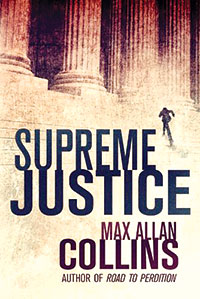 asks Reeder to take a look at the video footage and work his mojo. Since Reeder’s firm handles security for the restaurant where Venter was killed, he queues it up and after several views, realizes that Justice Venter, already being a hailed hero in the media for supposedly saving his clerk’s life, was actually trying to make a break for the fire door and get o-u-t. He also notices some deliberate behavior on the part of the two “robbers,” which indicate they were there strictly to murder the justice and the robbery and terrorization of the customers was just cover.

This is the outline of the situation that gets Reeder back into working with federal law enforcement. He eventually winds up on a task force, as a consultant, working for the FBI, who take over the case from the D.C. police. Reeder is appointed by the assistant director of the FBI herself and will be working under the lead, his former partner, Gabe Sloan. Sloan and Reeder are godfathers to each other’s daughters and go way back. Sloan partners Reeder with Patti Rogers, who has been Sloan’s partner for the past couple of years. These relationships are important to how the story develops.

Things amp up when just a few days after Henry Venter was killed, a second justice, Rodolfo Gutierrez, is murdered in his backyard while putting out birdfeed. So many things at the scene do not make sense on initial viewing. 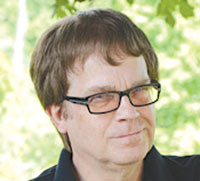 Venter was African American; Gutierrez is Latino – were they killed by some ultraconservative hate group because they were racial minorities or killed because they were politically conservative, taken out by someone hating the reversal of Roe v Wade? The only thing the task force is sure of at this point is that Venter’s death was an assassination and the robbery was just a cover. At this point, they finally realize that all the living justices need 24/7 security.

It was exciting and entertaining enough to keep me turning the pages. A plus is that the reader gets nice little history lessons throughout the book. Each chapter is introduced with a quotation from either a former Supreme Court justice or a former President, a nice touch I thought.

The author, Max Allan Collins, wrote “The Road To Perdition,” which was made into a movie starring Tom Hanks (they changed the ending drastically for the movie). He has written dozens of other novels as well, so if his name is familiar to you, you likely are a mystery lover. As you can see by the publisher, Thomas and Mercer, this is an Amazon book. As I write this article, the book is available only in e-book, paperback and audio formats, but by July 1, it should be available in hardback, according to the author’s website.

Like a cold fruit salad on a hot July day, “Supreme Justice” is light but satisfying. I rate it at 3.75 out of 5.