Support the VFW: Purchase a flag 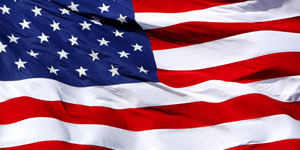 Dave Gardner, the Flag supply Officer for VFW Post 6370 also handles the used flag receptacles. Recently, Dave received a call that the flag box at Veterans Park was overflowing. This, after only 16 days since the last trip made to empty it. He arrived to find the top door overflowing and jammed, and the bottom also filled. Dave filled two large bags with the contents, which numbered 89 US flags of various sizes, ranging from 8X12 stick flags to an 8’ X 12’ commercial flag. During the same time period, Marco Island VFW Post #6370 sold only nine US flags. That’s almost a ten to one ratio of flags returned to flags sold. Why?

The Marco VFW Post provides American-made (as in Kansas City) flags to the residents of the island. These flags are the highest quality and our prices are about 60% of the same flag at a box store, and about 40% of the price from a company such as Annin in New Jersey. Not only will these flags last longer than one purchased from a chain, but they also support American jobs.

Based on sales of flags by the Marco VFW Post versus flags that have been disposed, only 10% of the flags are purchased from the VFW. 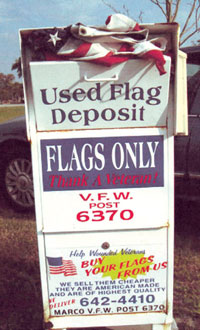 at VFW pricing.  You can get the City, USA, and POW flags. They are located at 1000 N. Collier Blvd across from the Town Center Mall.

All volunteers in the VFW help their brothers-in-arms, who are called our “Comrades” when they are in need. The VFW sends thousands of dollars each year from our ‘service fund’ which is charged by our charter to be used only for this purpose. There are thousands of veterans in the United States who can no longer care for themselves and have no one else to help them. The Veteran’s Administration, along with money sent from this and other VFW Posts’ service funds, give these people a place to live in comfort, dignity and the companionship of their comrades for the rest of their lives.

Dave spends as much of his time and money so that Marco Islanders will fly the symbol of our great and free country, the Stars and Stripes.  Veterans believe in our country after spending part of their lives defending it, and they believe in the flag and want folks to fly it proudly. They carefully store, ship and ensure the careful retirement of your flags in accordance with the best practices. Use the receptacles to retire a flag, and return the favor, save money, and buy one of the fine flags from the VFW. You can be assured that your contribution to their cause will be greatly appreciated.

One response to “Support the VFW: Purchase a flag”