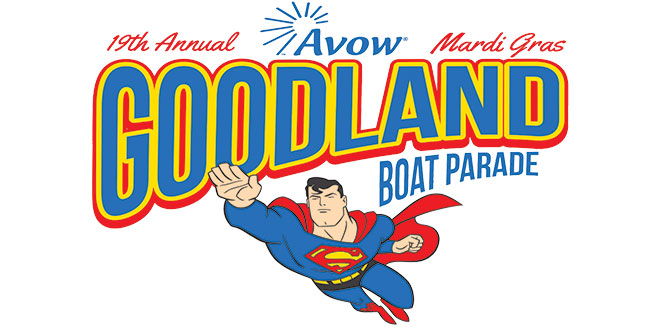 One of the safest places to be is Goodland? At least it was on February 21st, as the 19th Annual Goodland Boat Parade brought in the superheroes.

“This is so cool,” said Sarah, a visitor from New York. “Floats that float and they all look great!” The boat parade is part of the Goodland Mardi Gras celebration and the turnout was fantastic with $17,000 raised for Avow Hospice on this day.

Fifteen boats entered the parade with numerous variations on the superhero theme. As each boat passed through the harbor, judges had a

tough decision ahead of them. In the end, “American Sniper”, Jack Miller and Vicki Wood, was awarded top honors with 89 points. They were followed closely by “True Heroes: Freedom isn’t Free”, Chuck and Sue Thomas, for second place with 87 points. “Calusa Indians”, Greg Bellows and GCA, won 3rd place with 81 points from the judges.

Along with a fantastic visual presentation, each boat blasted related songs and music to accompany their chosen theme. Combined with the wafting aroma of great food, it was a true spectacle for all the senses.

Mike Duncan and friends on the “Superhero”.Yes, those wings actually do flap.

the $5,000 50/50 Raffle receiving half the prize with Avow Hospice receiving the other half. “I thought it was an early April’s Fool joke when they called me,” she laughed. “I couldn’t believe it!”

“It was a great day for the spectators and the boaters,” said Elaine Ritchie, parade organizer. “Avow is thankful for both the money and the awareness that we raise through this event.”

Avow Hospice provides care and comfort for seriously and terminally ill patients. Over the years, the Goodland events have raised over $300,000 for their programs. For more information, or donate, go to avowcares.org