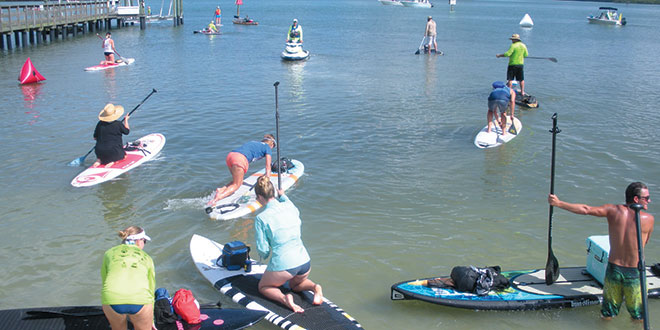 The first time was a fun time for Cragin and Kaye Anderson at the fourth annual SUP Poker Run to benefit the Special Olympics Florida – Collier County.

It also proved to be a bit more challenging than expected for the Naples couple, who were taking part in the recent stand-up paddle boarding event for the first time.

“It was a lot of fun,” said Cragin Anderson, as he lugged his board to the shore at the end of their run. “We ended paddling back from the last stop, in the current. The total paddle was three hours and the total distance was seven miles, so it may have been a little bit more than I thought I was going to do.”

Kaye, left, and Cragin Anderson return to the Capri Fish House, along with Tim Rose at the end of the SUP Poker Run.

the Capri Fish House on Isle of Capri served as the start and finish line for the poker run, which also had stops at Rose Marina and the Snook Inn on Marco, and Island Gypsy Café on the Isle of Capri.

Participants received a playing card before departing on the run, collecting additional cards at each stop and at the finish line. Prizes were awarded for the first, second and third best hands, as well as the worst hand.

With a good-natured chuckle, Cragin Anderson said he and his wife made a new friend while plying the Marco River during their return trip, Tim Rose of Marco.

“We were joking, the three of us, about how it was stationary paddling, he added. “We weren’t getting anywhere

at all as we were paddling.”

This year’s poker run drew about 100 participants, up from 90 in 2015, continuing a trend of increasing participation and proceeds, said Becky Newell, an organizer of the event and a volunteer.

“Everything is record breaking this year,” she said. “The big difference this year is the number of sponsorships. We’ve really taken off with sponsorships.”

Newell said about $9,000 was raised in 2015, after expenses, a total that was expected to rise to about $12,000 this year. “It’s just really taken off and it’s really all because of the support of the community,” she added.

“I even have people now who go on-line, register and donate and don’t even show (for the run),” said

She is thrilled with how the local event has grown.

“I can’t stop smiling,” said Dangler. “People contact me and want to know, when is the next one? What can I do to help?”

Collier County’s branch of the Special Olympics was the first in Florida to hold the SUP event and to create a paddle board team for their athletes. Today, there are 30 to 40 counties taking part, said J.J. Weibling of Golden Gate, who was instrumental in starting and coaching the local program and in helping it spread across the state.

“We’re going to do nothing but grow,” said Weibling, who is Special Olympics Florida – Collier County’s athlete recruitment director.