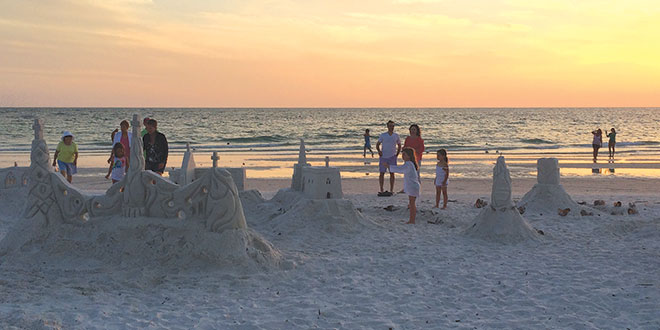 My oldest daughter and I went for a relaxing walk on the beach one evening (actually, I walk; she runs). We typically meet back up somewhere in the middle. As we met, I noticed a few sand castles behind me. We decided to take a closer look, and are so happy we did.

We found some amazing sand sculptures. Not only were they ornate and complex, but some were built to align with the 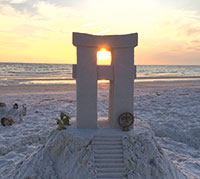 sun, and we had perfect timing! After admiring a few of the structures, we found the artist, Tom Taylor, sitting nearby enjoying his time watching the gathering crowd.

Earlier in the day, a 14-year-old asked Tom to teach him how to work with the sand. Tom agreed if he’d lug around buckets of sand and help Tom sift. Tom said he had plenty of sand to work with, and he shared with the young boy much of 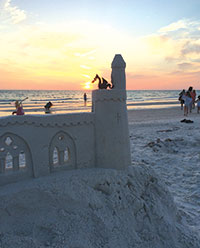 his acquired expertise. Tom brings small figurines to use with his creations. It brings an added element which really seems to bring them to life.

Tom once sculpted Namaste (praying hands) while in India. He mentioned the sand was some of the best in the world he’s worked with as it had magnetic properties. The sculpture was quite tall, and by morning the water had risen so the base was hidden leaving the hands sticking up out 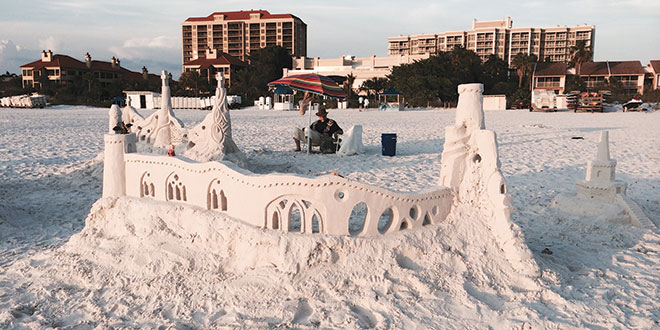 Sandcastle with Tom Taylor, artist, in the background.

of the water. He said fishermen lined up along the shore praying and chanting as they passed.

Tom and his wife, Elizabeth, were on vacation from Vermont and only here for four days. He said he does get a couple months during the summer where he gets to practice his art — even in Vermont. According to Tom, he uses the art as a form of 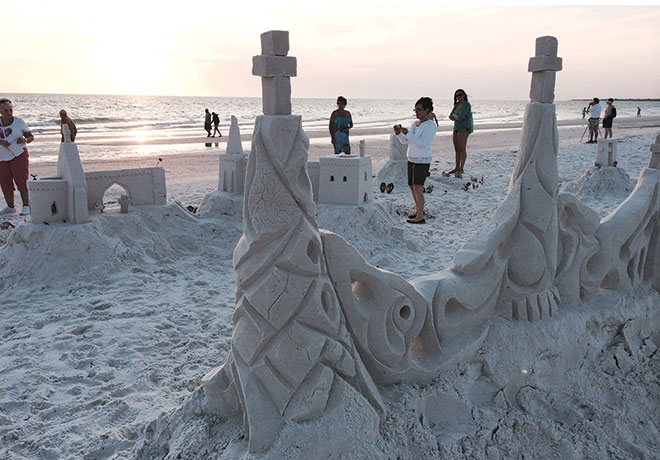 meditation and prayer. Elizabeth says it is very healing for him. They have travelled all over the world doing sand sculptures. He does not use any fixative or additives. He did, however, sift all the sand he used on Marco.

Dozens of people stopped by to admire Tom’s work. It’s great to see a visitor leave something on the beach that everyone enjoys, and when it is done, it leaves no trace.