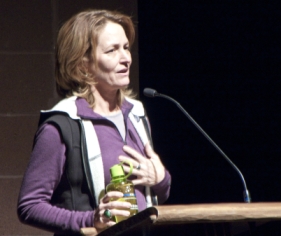 OK, Day 6 and, guess what?  It’s snowing!!!!!! It looks like a mini blizzard out there.  I am skipping an early film and won’t venture out until noontime.

Jake Scott, the son of prolific producer and director Ridley Scott, directed Welcome to the Rileys, which provided a break from his typical roles for James Gandolfini as a grieving father who takes a young runaway under his wing.  Melissa Leo gave another amazing performance.  The film also stars Kristen Stewart.  It was another good festival entry.

It’s a Wonderful Afterlife, written and directed by Bend it Like Beckham’s Gurinder Chadha is an entertaining spoof  with a wacky performance by Sally Hawkins (Happy Go Lightly).  Typically, I don’t like films where you have to suspend belief. Once I  accepted the film for what it was, I sat back and laughed along with the rest of the audience.  It tells the story of a mother whose obsession about finding a husband for her daughter goes to murderous lengths.