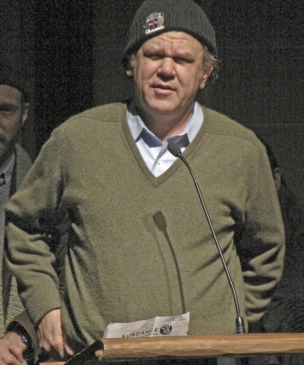 Day 5 begins cloudy, 16 degrees, but no snow.  The sound of blasting to prevent avalanches continues to fill the morning air.  I see that it is raining in Marco.  I hope none of my friends dare whines to me about the
rain!  Four films are on my agenda for today.

The first big deal of the festival has been made.  Lionsgate bought Buried for $3.2 million.  The film is about a military contractor in Iraq who is kidnapped and buried alive with only a cellphone. It takes place entirely in
a coffin.  It was not on my list of ‘must sees’.

It does seem to be a different Sundance this year…and not just because of all the snowy days!  Although there are some disappointments, the films seem stronger and better than ever, but the deals just are not happening….at least not yet. Call it a sign of the economic times.  Maybe that’s why the films are so good: only the strong possibilities are actually getting funding to be made.

The economy has hit the festival, also, with some cutbacks evident.  Gone is the waiting tent for ticket holders at Eccles Theater, the largest venue. Instead, they snake through a line inside something called “the black box”.
In some ways it is better as long as you get there early and can actually wait inside.  However, the limited access, and sometime no access to bathrooms has many in line complaining, and rightfully so.  The other day, there was more excitement over the sighting of Bill Gates than sightings of publicity seeking hangers on such as Paris Hilton and the Kardashians.   One of my favorite moments came when I was walking on Main Street and there was a mob surrounding an actress, oohing and ahhing and snapping photos.  I didn’t recognize her, so I asked the man next to me who it was.  His response was, “I have no idea…I don’t own a television.”  Not an atypical response in a place like Park City!

There was a note of irony on our way to the screening of Animal Kingdom when we passed a dead moose on the side of the road.  The film is from Australia and is about an orphaned young man who goes to live with his mother’s family who happen to be criminals in 1980’s Melbourne.  The writer/director claimed that there was quite a bit of lawlessness in that city at that time and his story was inspired by a combination of true events. Although this type of film is typically not my first choice of what to see, I thought it was an excellent film and enjoyed it.

Then it was on to The Holy Rollers,  a film about the illicit drug trade that used Hassidic Jews to smuggle “the goods” in the late 90’s New York.  A solid story that disappointed a bit but still was worth seeing.  It starred Jesse Eisenberg who was a hit at Sundance last year in Adventure Land.

Our third film of the day was Son of Babylon, incredible in that it was filmed in Iraq.  It is the story of a grandmother and grandson in search of his father who went missing in 1991 and whose body is probably in one of the mass graves discovered after the fall of Saddam Hussein.  Usually, children in this situation illicit a lot of feeling from the audience. Unfortunately, this child didn’t seem to connect. There is a particularly touching scene at the site of one of the mass graves when the grandmother, who speaks only Kurdish, sits beside a woman who speaks only Arabic.  They appear to carry on a conversation, and you realize that although they do not understand each other’s words, they do understand each other’s anguish and sense of loss. As the child and his grandmother ride through the streets of Baghdad, it is striking to realize that the shooting, the bombs, the smoking wreckage are not special effects, but reality.

We ended the day with the world premiere of The Extra Man, a farce with an air of sophistication.  There were excellent performances by Kevin Kline and Paul Dano (Little Miss Sunshine, There Will be Blood), with John C. Reilly adding to the hilarity.  While this film elicited more laughter from the audience than any other film I’ve seen, I’m not sure that a general audience would respond as well.  My husband compared it to the marketability of a Woody Allen film.  Those of you who are Allen fans know what he is talking about.

There is a film called Frozen that is receiving a lot of buzz.  It is a suspense thriller (AKA horror film) about three skiers who get stuck on a chairlift.  This is a film that will be in theaters, but given how I feel about the cold, you won’t get a review from me as I won’t be seeing it!