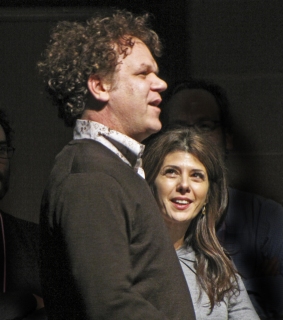 The Company Men will definitely make it to local theaters.  Featuring Ben Affleck, Kevin Costner, Tommy Lee Jones, Chris Cooper, Craig T. Nelson, and
Maria Bello, it tells the timely story of corporate downsizing. Often when a
film has so much star power, it disappoints.  This film doesn’t. John Wells,
the writer/director has a long history in television, having worked on shows
such as ER, The West Wing, and Southland.  In speaking about the film after its screening, he noted that the original script focused on the bursting of the dot com bubble and was inspired by his brother-in-law’s experience.  By the time the script was ready for filming, the economy had recovered and the story seen as not relevant.  With today’s economic environment, he revised the script to  be about a large corporation.   While they involve a similar subject, I think  The Company Men is a different but stronger film than Up and Away.

I didn’t see Hesher, but the word from those who have, is mixed.  Starring
Joseph Gordon-Levitt in a surprising role, there were some who liked this
dark drama/comedy, especially for Gordon-Levitt’s performance  and others
who felt it wasn’t at all for them.

Cyrus is already being distributed by Fox Searchlight.  It is a new comedy from the Duplass brothers and stars John C. Reilly, Marissa Tomei, Catherine Keener, and Jonah Hill. It’s quirky but entertaining.