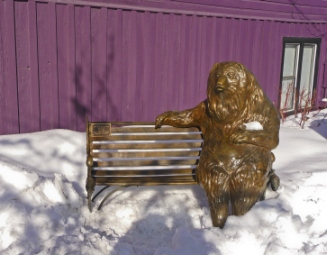 Bear on a Bench doesn’t seem to mind the weather, as he rests between movie showings.

Day 2 was a first during our pre-shift volunteer meeting: we talked about what to do in case of an earthquake.  Park City lies near the Wasatch fault, which some say is long overdue for some action. Haiti is on many people’s
minds and the festival has set up a special text messaging number to donate to the efforts.  The only problem is that there are so many people here using iPhones, that it is almost impossible to get service: good ‘ole AT&T.

Today I saw Happythankyoumoreplease, written, directed, and starring Josh Radnor from How I Met Your Mother.  It’s a light, romantic coming of age (COA) comedy.  What strikes me these days in COA stories, so popular with first time filmmakers, is that the characters who are faced with having to grow up are older than they used to be: a reflection, I think, of reality. The film is predictable, and the three interwoven stories do not allow much
character development, but there are some very clever lines that elicited laughter and appreciation from the audience.

So much for hoping there will be less emphasis on celebrities.  There is still lots of hype surrounding the celebs who are in attendance.  Tonight it will be at a maximum for all the actors who are here for the premiere of The Company Men.

There has been 32 inches of snow in the last 72 hours.  Because it was snowing heavily when I finished my volunteer shift, I chose not to stay for an evening film.  It took me 2 hours to get home (10 minutes usually by car) via bus service due to the snow and Sundance (or should I call it Snowdace?) traffic.  It is always crazy the first three days.  A local amusement is to watch the women in spike boots on their way to parties  slipping and sliding as they try to maneuver over snow, ice, slush.

The Runaways is now the buzz film of the festival.  Starring Dakota Fanning and Kristen Stewart, it tells the story of Joan Jett’s and Cherie Curry’s rise as a music duo in the 70s.