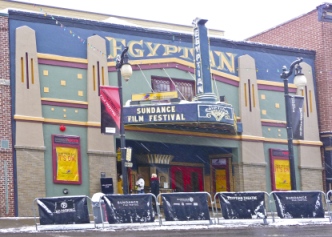 How about a little (more) snow for Sundance?

Yes, the snow is back again, but the town has emptied out.  Main Street is almost deserted and we didn’t have to wait for a table for breakfast at the Eating Establishment, a popular restaurant.  Today, the various award winners will light up the screens.

The Grand Jury Prize for US Documentary went to Restrepo.  The film chronicles one year in the life of a platoon of soldiers in Afghanistan; Restrepo is an outpost that was named for one of their medics who had been killed. Two things struck me: how primitive the outpost was and, given the terrain and the type of fighting that is going on, how is the US ever going to make any progress in Afghanistan.

The Grand Jury Prize for US Drama and also a special award for screenwriting went to Winter’s Bone. Set in the Missouri Ozarks, it tells the story of a courageous teenager who searches for her

meth-cooking father while taking on responsibility for her ill mother and two younger siblings.  Evocative cinematography and a strong performance by the young lead, Jennifer Lawrence characterized this film.  The purchase of Winter’s Bone was announced prior to last night’s awards ceremony. How fortunate for Roadside Attractions who bought the film for only $1 million.  A summer release is
planned.