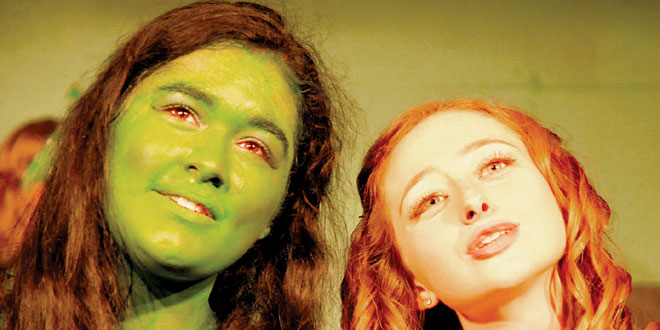 The 30 kids of the city of Marco Island’s summer theater camp flew to new heights in their performance of Wicked after a whirlwind two weeks of rehearsals. This was the second two-week summer theater camp session, which is sponsored by the city of Marco Island and The Marco Players Theater. Earlier this summer, campers brought down the house with their performance of West Side Story.

Wicked was a departure from Director GIna Sisbarro’s original plans for the second summer session. Oklahoma originally was slated, but Sisbarro felt something was missing. “I reviewed Oklahoma, and it fell flat,” she explains. “I watched it again, and nothing. The numbers were a little too complicated too. The kids have been asking for two years to do Wicked,

The Ladies of Oz practice their “One Short Day” number during dress rehearsal. PHOTOS BY NOELLE LOWERY

so I surprised them.”

The plot of Wicked takes the audience back to the beginning of L. Frank Baum’s Oz books, and runs parallel to The Wonderful Wizard of Oz. Developed for Broadway in 2003, the musical play is based on the 1995 novel Wicked: The Life and Times of the Wicked Witch of the West, which was written by Gregory Maguire. It is the first in “The Wicked Years” series, and was followed by Son of a Witch (September 2005), A Lion Among Men (October 2008) and Out of Oz (November 2011). 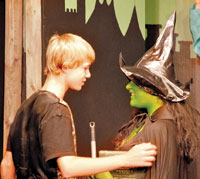 of Oz is a seminal character.

However, while the plot runs parallel to the beloved Oz story, Wicked tells the tale from an entirely different perspective — that of the Wicked Witch of the West. It also asks some pretty serious questions: what it really means to be wicked, if people are born wicked and if the intention or the result is more important.

Sisbarro found it easy to adapt the play for her young cast. “I always ask the kids, ‘who can get close, close, close to the character’,” she says. “I ask them if they are able to give me that.”

They gave Sisbarro “that” and so much more last weekend in the black box theater setting of The Marco Players Theater. The small stage and minimalist set — a green 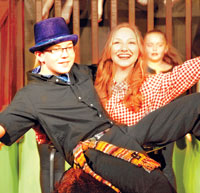 Cooper Ussery as Boq and Jessica Lang as Nessarose give a surprise ending to their big number.

and black painted skyline of Oz and red and black corn field — really allowed the kids to shine.

“There is not a lot of room for glitz here,” notes Sisbarro of the theater. “I tell the kids, ‘you have to sell the play. You have to make it come to life.’ It is all about creating the illusion of flying monkeys or Elphaba flying across the stage.”

In the end, Sisbarro knows her kids nailed their performances, but she also hopes that they learn some key lessons about the theater from their experience. One, “we are a family, and we have to come together as a family.” Two, “theater really is for everyone, and everybody is a star.” Three, “the ensemble is the meat and potatoes” of the production, and four, 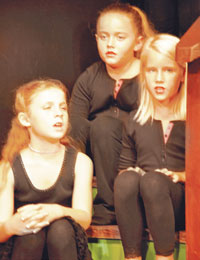 Hailey Adams (left), Seneca Lowery and Kaitlin Campbell of the ensemble sing in solidarity with Glinda during a performance of ‘Wicked.’

“we have a rule: no bullies. We embrace everyone.”

“I would rather work with youth and teens,” Sisbarro says. “They are ready to possess the theater. They are ready for the learning process… They are good enough. They are talented enough… It really is bigger than just the production.”