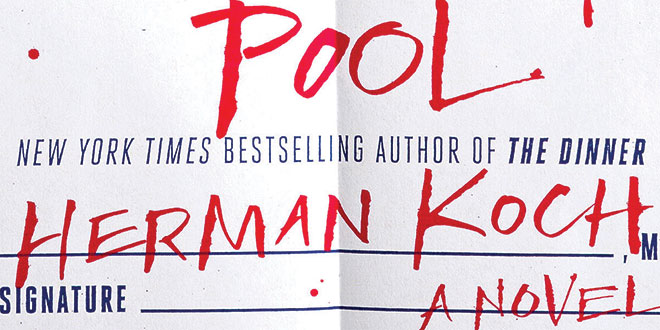 He is back, folks, and he is even more dark and twisted than in “The Dinner.” Actually, those two couples appear positively lighthearted compared to Dr. Marc Schlosser, a general practitioner in the Netherlands whose patient base is composed of actors, writers, artists, celebrities from the creative sector. Dr. Schlosser also serves as the narrator of this story.

The title comes from the fact that Marc’s most famous patient, actor Ralph Meier, has enticed the doctor to bring his family to the Meier’s rented vacation home. Ralph is a known lech who “has eyes” for Caroline Schlosser, Marc’s wife. Marc also catches him throwing lustful glances at 13-year-old Julia, the elder of the two Schlosser daughters. On the other hand, Marc rather fancies Ralph’s wife Judith.

So, ignoring all the red flags, and reneging on his promise to Caroline that they would have a family camping vacation away from everyone, Dr. Schlosser reserves a camping ground that just happens to be within view of the Meiers’ summer house (which Marc had found on Google Earth). When the Schlosser girls hit it off with the similarly-aged two Meier boys, the tent is moved to the summer house’s side yard.

While in “The Dinner,” Koch addressed the issue of how far parents would go to protect their children, in “Summer House with Swimming Pool,” Koch looks at what parents will do to protect themselves regardless of how the children might be affected, as well as how far one might go in exacting revenge. Indeed, Marc Schlosser’s act of revenge might be one of the most diabolical I have encountered in modern fiction. You will never look at your own doctor the same way again.

The book begins in the aftermath of the summer vacation, about a year afterwards, with Marc describing his office routine and his patients. He works five hours a day, and each patient gets 20 minutes 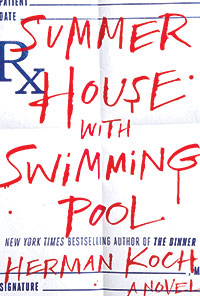 although he knows within one minute what is wrong with the patient — he doodles while they talk, thinking they have the most caring physician in the world. Actually, he is reflecting on the repulsiveness of the human body and what patients do with and to their bodies, and fantasizes about them all suiciding. He is also savaging the Dutch health care system, home birthing, book launches, opening nights for movies and plays, the desire to have sons rather than daughters, etc.

In several pages of descriptive narrative, Koch gives us a riveting introduction to Schlosser’s dark side, which seems to be his only side. Often, narrative in fiction can be lumbering and tiresome, something to be endured, or skipped, until the next dialogue, but Koch’s characters are captivating though not at all likable. The beautifully written narrative serves to layer the context for the coming revelations about preceding events. It reveals as much as the dialogue. For example, although Marc describes the misogyny of Ralph Meier, which he sees as repugnant, Marc himself notes during a conversation with Judith Meier: “They’re not used to it, women, to making people laugh. They think they’re not funny. They’re right, usually.”

The reader does not know until about two-thirds of the way through the book what exactly happened that precipitated Schlosser’s act of revenge or for that matter what that act of revenge entailed. I had chills reading that scene — actually talked to the page, “Oh, no, you didn’t.”

I enjoy dark misanthropy to an extent, and I would say “The Dinner” was dark and twisted while “Summer House” is dark and French braided. There were a couple of places where the “ick” intensity was ramped up pretty high, but I never lost interest in this story. It was worth every second I spent with it.

Pure entertainment. Go ahead, take a walk on the dark side with Marc Schlosser. There are no warm fuzzies here, but this book is bound to engender some great discussions this summer. Rating: 4.5/5.0.

Happy Birthday, America! Have a great time on the Fourth.