Sullivan family fights against the odds 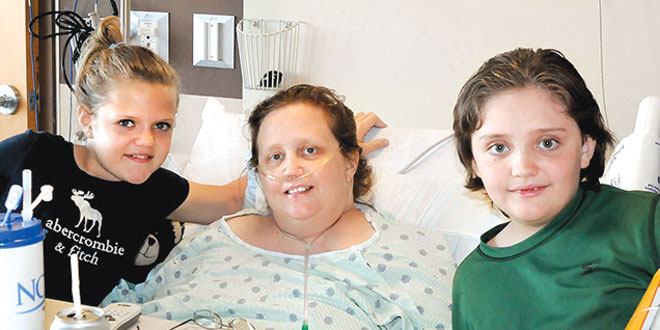 For Mike and Michele Sullivan, the little things in life bring joy. Their daughter, Cassie, playing the drums. Their son, Ryan, performing in the theater. A day without a doctor appointment or visit to the emergency room. Michele coming home from the hospital — again.

For the last three years, the Sullivan family has faced insurmountable odds as Michele battled her way through countless severe medical problems. After numerous visits to various hospitals and doctors, a trip to the University of Miami’s Neurology Center last fall revealed Michele suffers from Multiple Sclerosis. She has been a regular in the intensive care unit, diagnosed twice with septic shock. She nearly died in April and spent 11 weeks in ICU. Now, she is suffering from renal failure.

“(In April), they put her in a coma to help her through it or allow her passing to be easier, whatever the outcome,” explains her husband, Mike. “It was a miracle she came around. She must have work left to do.”

To be sure, Michele’s illnesses and medical care have left a huge financial hole in the Sullivan family pocketbook. Not only has Michele’s condition left her totally disabled and unable to work, but it has Mike burning the candle at both ends. Between being his wife’s primary caregiver, taking care of their two children and trying to make ends meet with his photography business, Mike and the couple’s finances are spread very, very, very thin.

In fact, this dire situation forced the Sullivans to make some very difficult financial decisions. The kids need food, clothing and shelter, and if Mike and Michele are to provide these essentials, they must spend what little money they have — $6,500 — to wage a legal fight for Michele’s Social Security Disability Benefits. Although the Sullivans were victorious in June, they continue to wait on the three-year retroactive payment. According to Mike, these funds will help the family catch up on their mortgage, fix their car, pay credit cards, get braces for the kids — all things most of us take advantage of everyday.

The disability payments also will help the Sullivans finally disconnect their septic tank to hook into the city of Marco Island’s sewage system. The city’s Code Compliance Services originally mandated the sewer connection in March 2010, which is about the same time Michele fell ill. The cost of the utility hook-up runs between $1,500 and $2,000 depending on the plumber providing the service. Between medical bills and visits to specialists and the ICU, the money for this task simply was out of reach for the Sullivans.

“I called (the city) when we were originally supposed to hook into the sewer, and at that same time, my wife became very sick. (Liz Carr) was very helpful and gave us an extension,” Mike says. In fact, Carr, the city’s Code Compliance Supervisor, has granted the family a number of administrative extensions over the last three years. It has been a common practice for the city, as many Marco Island property owners have petitioned the city for grace on their utility hook-up in order to deal with medical issues or foreclosures resulting from the housing crisis.

On August 13, the grace period was cut off by the city’s Code Enforcement Board. Among the few remaining utility connection cases for the city, this was the first time the Sullivans’ case came before the board, and it was apparent the board members had little patience or sympathy for the Sullivans. With Board Chairman Dick Adams absent, the board unanimously ordered that the Sullivans had 31 days from August 15 to connect to the city sewer. A $250 administrative fee was assessed against the Sullivans, and if they do not comply by the 31st day, they will be fined $250 per day.

They were at the University of Miami Multiple Sclerosis Clinic for an appointment with Michele’s MS specialist. While at her appointment, her condition turned critical, so critical she could not begin the treatments for her MS. In fact, doctors diagnosed her with her second case of septic shock this year, which was accompanied by renal failure. Michele was immediately admitted to the Intensive Care Unit of the hospital.

When Mike received the board’s order a few days later, he was devastated, and quickly emailed an open memo to the entire Marco Island City Council asking for some help and compassion. He even posted his plight on FaceBook. “I don’t understand why the city cannot demonstrate a little compassion when we are obviously caught in the middle of a very serious financial/medical hardship,” Mike communicated to the councilors.

Since the board rendered its order, the Sullivans received some satisfaction — little things again for which they are grateful. Michele came home on August 31, and City Council Chairman Joe Batte and councilors Larry Honig and Chuck Keister responded that they would look into the Sullivans’ situation with code enforcement. “I hope everyone remembers that when they are up for re-election,” Mike posted on his FaceBook page.

The progression of this case is reopening the long-running debate about objectivity and consistency in code compliance actions on Marco Island. For City Councilor Larry Sacher, who was present during the Sullivans’ hearing on August 13, code enforcement issues and how the city handles them are a major concern. He is not a fan of the city’s process of administrative extensions and delaying of enforcement.

“I feel a lot of sympathy for the Sullivans,” Sacher notes. “We have thousands of citizens who met their obligations, and chose one of the payment alternatives offered. At some point, we have to draw the line. This is an extremely flawed process.”

Still, Mike is counting his blessings because he has been told the Code Enforcement Board will revisit his case and allow the Sullivans to request an extension during another hearing on September 10. The procedure will require a motion by the Code Enforcement Board to rescind its previous order, and this motion must pass with a majority vote of the board. If it passes, another motion will be made to provide an extension, and it also will need to pass by a majority of the code board.

Sacher believes city staff over-stepped its boundaries by reopening the Sullivans’ case. “I find it unacceptable and grossly unfair that city staff did this,” Sacher says. “It demonstrates poor management on the part of the city…We have dedicated volunteers that serve on the board, and to negate the action of the board is a slap in the face. It denigrates the actions of the board.”

“There has been no consistency to this process, and this is a continuation of the lack of consistency,” he insists.

With Michele home now and a second chance to appear before the Code Enforcement Board, Mike vowed to be at the meeting to speak and to fight for his family once again. “I hoped for better. I rattled some cages, and it got a little bit better,” he notes. “I am hoping the Code Enforcement Board is more compassionate… I am just going to hope the board does the right thing.”