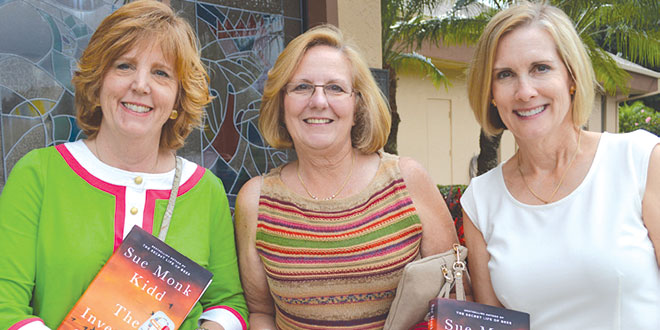 Sherrie Meek, Maureen Brennen and Susan Schalier drove down from Naples for the book signing event.

Recently, the Marco Island Center for the Arts and Sunshine Booksellers joined forces to bring renowned author Sue Monk Kidd to Marco Island for a book signing event for Kidd’s latest release — “The Invention of Wings.”

It was a natural partnership, after all. While Rosemary Wick, president of the Center’s board of directors, is a close friend of Kidd’s, the owners of Sunshine Booksellers — Stuart and Theresa Unsworth — have represented her for years.

To say the partnership and the event were unprecedented successes is an understatement. Tickets sold like proverbial hotcakes, and soon, the event outgrew its intended space at the Center for the Arts. In fact, nearly 300 people bought tickets.

Enter the Jewish Congregation of Marco Island. Its large auditorium and additional parking made it the ideal venue for the event. The event was split between a wine and cheese 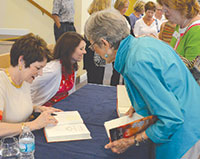 Sue Monk Kidd chats with fans as she signs books.

Kidd spoke for about an hour, alternating between reading passages, describing her main characters and telling stories of her life. The book — “The Invention of Wings” — is a historical novel set in Charleston in the early 1800s. It is about a white girl named Sara Grimke, who is from a wealthy family, and her black handmaid/slave Hetty “Handful” Grimke, who she was “gifted” when she turned 11 years old. The book details their relationship and the “role” of women in society at that time.

In her talk, Kidd discussed her understanding 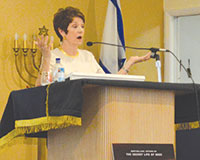 of the constrictions placed on women from her own first-hand point of view. She likened her own struggle to find her destiny with Sara’s and Hetty’s. Kidd always wanted to become a writer, even from an early age. So, when it came for her time to choose a career, she ended up becoming a nurse — a proper career for women in the 60s and 70s, just like being a teacher, social worker or secretary.

Kidd is not stranger to themes focusing on women in society, and tackled similar questions in her much celebrate book “The Secret Life of Bees.” Published in January, “The Invention of Wings” was selected for Oprah’s Book Club 2.0 and is a New York Times #1 Bestseller.

“The book signing proceeded flawlessly,” said Wick. “We will continue to partner with Sunshine Booksellers in the future because it is so important that we all work together.”