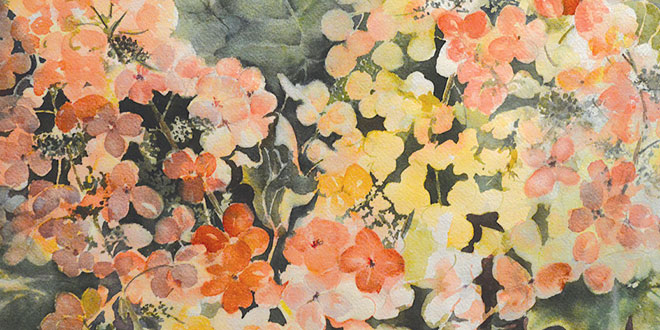 This watercolor of ‘Oak Leaf Hydrangea’ was done by Wanda Coady.

Student artists — young and old — took over the galleries at the Marco Island Center for the Arts during the month of April. Works from adult students who have taken classes at the Center as well as some completed by students of the Marco Island Academy are on display now throughout the Center and in the La Petite Galerie through April 24.

For the Center students, this was a juried exhibit, giving them an opportunity to “strut their stuff” to show their friends and relatives what they have learned and how far they have come in their studies. Their artwork covers all mediums including watercolor, oil, pastel, clay and stone sculpture.

In all, 44 local artists from 11 different classes offered at the Center submitted a total of 98 pieces of artwork. Each student was allowed to submit up to three pieces of art. Wanda Coady won first prize for a watercolor of her “Oak Leaf Hydrangeas” at her Illinois

“We’ve been looking for just the right picture for over a year now,” said Joan and William Malatestinic. “This painting has just the right colors — and from a flower we have in our own area.”

Coady also received an Honorable Mention for her watercolor of a bird and its nest. She is a student of Joan Scherer.

Two of Diane Reed Eiler’s students won second and third places with their paintings. Barrie Anderson won second place for her watercolor called “Springtime for Prickly Pears,” and third place went to Hope Hanley for her watercolor called “Big Cypress, Everglades.” Honorable mentions went to Irene Glynn for a Pastel called “Bromeliad” (a student of Linda Chambers); Anne Bailey for an abstract acrylic called “Winter 2014” (student of Eiler); and Robert Florentine for his oil painting called “Colors of the Everglades” (student of Inez Hudson). The judge for painting was local artist Karen Swanker.

Honorable Mention went to Robert Florentine, a student of Inez Hudson, for his oil painting of the Everglades.[/caption] class=”CBNGeneralContent”>Clay was judged separately by local artist Gerry Brynjulson. Ginny Mueller, taught by Rinny Ryan, came in first place for her clay tea pot called “Tea in the Garden.” Mueller’s own students, Patti Patrick and Barbara Sevigney, won second place and Honorable Mention respectively for their clay works, while third place in the clay category went to Janet Deanna (a student of Annabelle Johnson) for her fluted bowl called “Bowlero.”

Stone sculpture was not judged.

Meanwhile in La Petite Galerie, MIA students and their teacher Robert Eder displayed their innovative guitar designs. The project began with sketches, watercolors and acrylics that were scanned and enhanced using computer programs, such as Photoshop Elements, and then printed on archival watercolor paper. The finished products are for sale with the proceeds going to the school for future projects.

The Center for the Arts, located at 1010 Winterberry, is open Monday-Friday, 9 AM-4 PM. For more information about the educational program and events, call 239-394-4221, or visit the Center’s website at www.marcoislandart.org.