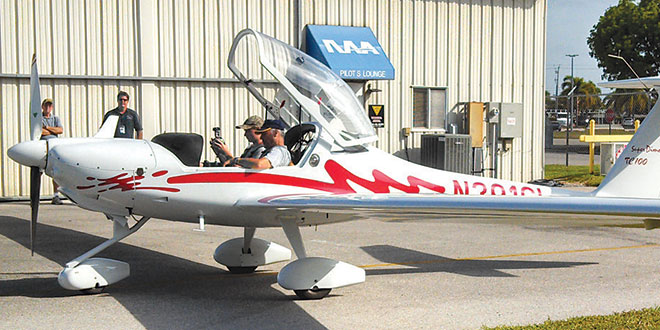 Bradley Chute went for the flight of his life on a recent Saturday morning out of Naples Municipal Airport, and the best part was the 15-year-old got to fly the airplane — by himself.

According to Davis, Leiti recognized that the school district was interested in offering an aerospace program to its students. “She introduced me to Dale Johnson (the current director of of Career and Technical Education for Collier County schools). Dale asked me to look at the state curriculum on aerospace. I did not feel that the state curriculum was a match to me since I was a current flight instructor. Dale asked me to design the curriculum. I designed and presented the curriculum for private pilot to the district, and the board approved it to start in the school year 2011-2012.”

To sweeten the prospects for students, Davis also reached out to his alma mater, Embry-Riddle Aeronautical University (ERAU), and created a dual-enrollment agreement between Embry-Riddle and Collier County Public Schools. Now, students have the chance to earn a full year of college credit toward an aviation or engineering degree at ERAU if they remain in the Lely program for three years. Courses included in the dual-enrollment program are AS121, private pilot ground school; AS120, Intro to aero science; and AS220, unmanned aerial systems.

Davis is happy to report that in just a couple of years the program is a big success with six Lely students already accepted to ERAU, one of which is currently a freshman at the university’s Daytona Beach campus. Additionally, two of the six students have received $150,000 in scholarships.

The James C. Ray Foundation also plays a part in the Lely program. Through the Experimental Aircraft Association and its Young Eagles program, the foundation offers five Private Pilot Solo scholarships at a value of $5,000 to Lely students. Once the five chosen students earn their solo certificate, they have the opportunity to submit for full private pilot scholarships. Because of the scholarships, students have to cover just 10 percent of their flight training costs.

Retired Collier County Circuit Court Judge Ted Brousseau is a local flight instructor through the Young Eagles program, and he was the instructor who took Chute up for his first turn at flying outside of a simulator and the classroom. After take-off, Brousseau shut the engines down and handed the stick to Chute, who safely piloted plane and passenger over Naples and Marco Island. Brousseau took control again for the landing.