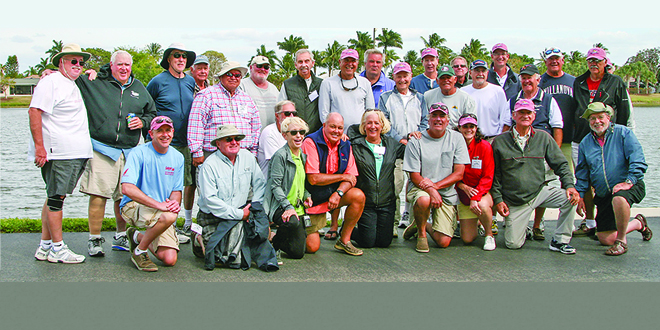 On March 4-5, the Marco Island Model Yacht Club and the Marco Island Department of Parks and Recreation held its 14th annual RC Laser Midwinter Championship Regatta, attracting competitors from around the country to Mackle Park’s picturesque shores. The Model Yacht Club, in conjunction with the AMYA RC Laser Class, hosted skippers from as far as the Bahamas to compete in this weekend’s blustery 20-mph winds for a well-earned title. The 26 entrants practiced Friday before Saturday’s qualifying races, ultimately being divided into the Gold Fleet and Silver Fleet for the main competition on Sunday.

The Gold Fleet’s Jim Kaighin, a multiple national champion from Marsh Harbour, Bahamas, scored first place in fourteen races over the weekend, culminating in an easy win on Sunday. It was his seventh time winning the regatta. Newcomer Fred DeSantis of New Jersey gradually climbed up the ranks to secure a second-place win, while Regatta regular Rob Seidelmann of Collingswood, New Jersey came in third.

The tiny scale-model Lasers were battered around the course as their captains raced against Mother Nature and each other. Balmy weather belied unusually strong gusts that reached up to 20 miles per hour, practically gale-force winds for the tiny remote-controlled Lasers on the lake. Skippers struggled to keep their boats on course, and while collisions and missteps occurred, 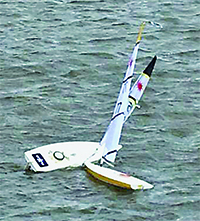 the atmosphere remained one of friendly competition. “It’s a gentleman’s sport,” explained DeSantis. Spectators mingled with competitors, trading stories and tips and sharing lunch, as Rocky and Mary Lee Cale oversaw the races.

Modeled after the most popular actual racing-class sailboat, RC Lasers are just one of 30 classes of yachts recognized by the American Model Yachting Association. The boats themselves are identical: money won’t buy you an edge in this sport, and skippers rely solely on their own finesse in maneuvering their boats, which can be bought complete and ready to go for a little over $300. Most participants are sailors themselves, while others come from slightly different backgrounds, like Silver Fleet competitor Jacques Rioux, who was a professional windsurfer. But the key to winning ultimately comes down to practice. Jim Kaighin himself attributes his many wins to simply spending lots of time in the water. “I’ve been doing this for awhile,” he said simply after the final race.

Florida, with 38 registered model sailing clubs, is an excellent place to be for anyone interested in this rewarding hobby. Competitions occur year round in various locations across the country, but many competitors agreed that Mackle Park’s sloped, grassy shores and floating dock make it one of the best racing venues in the sport. The Marco Island Model Yacht Club meets twice a week to practice sailing at the park.

More information on the sport can be found at rclaser.org and theamya.org.