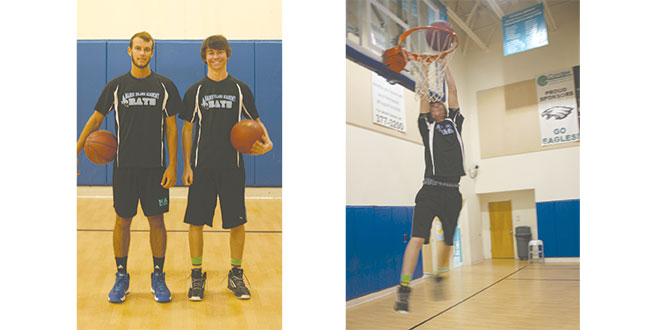 (Left) Preston Reese, left, and Cole Stretton were named to the All-Area basketball team sponsored by NDN. Stretton made the first team and Preston was honorable mention. The two were stalwarts for the Manta Rays who recorded its first winning season andwon the Class 2A-District 10 title. (right) Cole Stretton dunks! With a little help from Marco Island Academy teammate Preston Reese, Stretton, a 6-footer dunks the ball. Stetton got on Reese’s shoulder to get up to rim and then Reese walked away! PHOTOS BY ROGER LALONDE

If you watch Cole Stretton, no matter how much pressure comes from opponents on the basketball court, he seems to be in control.

Even though a target the past season, Stretton, a sophomore, had enviable statistics. Plenty good enough to make the Naples Daily sponsored All-Area team.

High marks for two players in Class 2A, being judged along with players from schools like Naples, Lely, Community School and more.

It marks the second straight year that a Manta Rays player was named to the team. A year ago, it was Jared Jackson and Stretton was honorable mention.

Stretton said going to a small school helped him.

“If I had been at a larger school I would have been playing junior varsity for at least my freshman year,” he said. “Playing varsity as a freshman was a really good experience for this year.”

Along the way his 18.8 scoring average per game was 10th in the state and No. 1 among all-area scorers. He was ranked second in the state for sophomores. He also led the area and the state in steals at four per game.

Reese earned his stripes at 6’11”, going up against bigger men every game, yet leading the area in rebounding at 9.8 per game.

“Cole was outstanding all season,” Raymond said. “He is the team leader and good student-athlete, setting strong examples on and off the court.”

In the classroom Stretton has a weighted grade point average of 4.2 and unweighted, 3.9.

Reese has played all three seasons on the basketball team.

“He was our only experienced big man and battled every game,” Raymond said. “He is the best vertical jumper I have ever coached.”

“Over the three years the team has changed tremendously,” Reese said. “The first year we had just six on the team. This year’s team had a better understanding.”

His tenacious inside play grew double-fold. “I got roughed up a bit, but I am the only person with size in the paint,” he said. “I don’t let size intimidate me now.”

Stretton played quarterback on the football team, where he was named honorable mention to the All-Area team. He also ran cross country and played shortstop on the baseball team.

He predicts the breakout team will be in football next season.

“Basketball was the breakout sport this year, beating some of the bigger teams, surprising some people,” he said. “We have a number of kids coming back for the football team that I think will become the breakout team.”

After covering area sports and community news for 15 years for Scripps newspapers, Roger LaLonde is now a contributor to Coastal Breeze News. He is also a licensed real estate agent with Premiere Plus Realty.