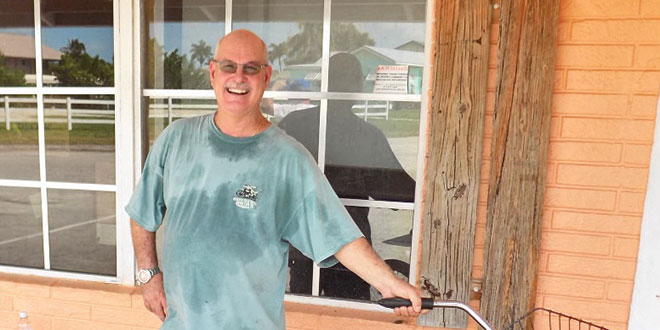 Steve Gober took over the reins of Stan’s Idle Hour Restaurant, upon his father’s death four years ago. By all accounts, he has done admirably in maintaining and burnishing the reputation and tradition at Stan’s. His dad, Stan Gober, would be proud. Last week, Steve showed me a bicycle, which he said had a large dose of sentimental value. It was a balloon tired old Huffy, with no gears. “It was my dad’s,” he said, “One of my cooks just gave it to me.” We were interrupted by an NBC-2 reporter who was doing a piece on Goodland Road. A week later, I caught up to Steve as he sat at the rear of Stan’s waiting for the customers to show up. It was Saturday, June 18th and Steve was in a pensive mood. I asked him to tell me the story of the bike. “You know,” Steve reminded me, “this is exactly four years to the day that my father died.” One of the many responsibilities Steve took on at that time was clearing out the stuff from his father’s Goodland home of 30 years. A lot of stuff had accumulated since the family moved there in 1982. An old rusted bicycle in the garage was one of the many items that ended up in the 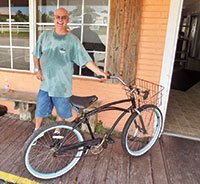 Photo by Barry GwinnSteve Gober with his father’s restored Huffy Bicycle. Obviously delighted, Steve didn’t have to be coaxed into a smile for this one.

dumpster. “My dad bought that bike in the mid 80s,” Steve said, “He was proud of his brand new Huffy and rode it over to the restaurant a couple of times a week. He put a basket on it, so he could pick up the mail on the way over.” When health problems intervened, the bike was relegated to the garage where Goodland’s salt air took its toll.

The bike was forgotten until it resurfaced on June 10, 2016. On that date, Angel, one of Steve’s line cooks, presented him with the refurbished and shiny of edition of Stan’s old bike. “Angel was helping us clear out Dad’s house in 2012,” Steve said, “He had repaired bikes as a sideline and wanted to see what he could do with this one.” Unbeknownst to Steve, Angel came back and fished the bike out of the dumpster. For the next four years, Angel worked on it when he could. Then June 10th, he presented it to his boss. “I was flabbergasted and delighted to see that bike again,” said Steve, “It was moving to me that Angel would do something like this.” As a memorial to his dad, Steve plans to display Stan’s bike in the upper room of the restaurant. There it will be safe, he says (and not likely to disappear again).