Staying Safe from the “Brain-Eating Amoeba” 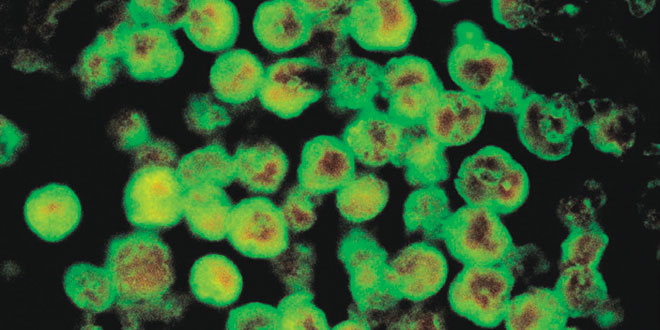 In the past month, stories of the young boy from Glades County who lost his life due to an infection caused by an aquatic amoeba have filled local headlines. Living in Florida, where summertime activities often including playing in around the water, people have understandably had questions about this microscopic nuisance.

Naegleria folweri (also known as brain-eating amoeba) is a free-living microscopic amoeba that naturally occurs in warm freshwater bodies such as lakes, rivers, canals, and hot springs and soil.

While tragic, the chance of coming into contact with Naegleria or contracting the resulting illness (Primary Amoebic Meningoencephalitis—PAM, for short) is quite rare. Health officials in Florida estimate that there is only one case for every 2.5 million hours that people spend in fresh water. Drowning and boating accidents pose a much greater threat to our state’s water enthusiasts. With that said, there are a few precautions swimmers can take to decrease their chances of exposure even more.

The first thing you should know is that, with the exception of Antarctica, this amoeba is believed to exist in virtually every lake and river around the world. It is also found in spas, hot tubs, thermally enriched waters and poorly chlorinated swimming pools. So, if you’re thinking of simply avoiding these aquatic environments, you might get a little lonely.

So, how does one avoid the amoeba? The best way to prevent exposure to Naegleria is to avoid stirring up bottom sediments, as this is where the amoeba lives and feeds. Once sediments are mixed into the water column, the amoeba can be forced up the nose of a swimmer who jumps or falls into the water. This increases the chance for it to enter into an ear or nasal passage where it can follow the olfactory nerve and gain entry into the brain, where it 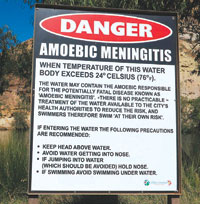 has been known to cause problems. Swimmers who have contracted PAM usually get it after rooting around the bottom of a lake or other water body in the heavy silt where the amoeba lives. Therefore, keeping one’s face away from the bottom of a lake, river, canal, etc. and keeping swimmers from jumping off a dock into shallow water—or any other scenario that would result in the disruption of bottom sediments—will significantly reduce the risk of exposure to Naegleria. Young children are at the highest risk of exposure as they tend to engage in such activities. It is also important to note that you cannot get PAM by eating fish from a lake.

Everyone can be further protected by wearing ear plugs and a nose clip (or a dive mask that covers the nose) when swimming. Remember, exposure to bottom sediments is the single MOST important factor that increases chances for infection. During most of the year, concentrations of Naegleria are rarely high enough to cause public health problems. However, as water temperatures rise during the summer, it provides a more accommodating environment for the amoeba to feed and multiply. So, if possible, avoid swimming in warm shallow waters during this time.

Early diagnosis is the best bet for survival. In the known cases where patients survived infection from Naegleria, the family doctor recognized the symptoms immediately and was quick to react with appropriate antibiotics. Persons who complain of severe headaches, rigidity of the neck, impaired sense of smell and taste, nausea, vomiting and/or a high fever, and who have been swimming in a lake should be taken to a doctor. If the treatment is going to be effective, it needs to be administered quickly.