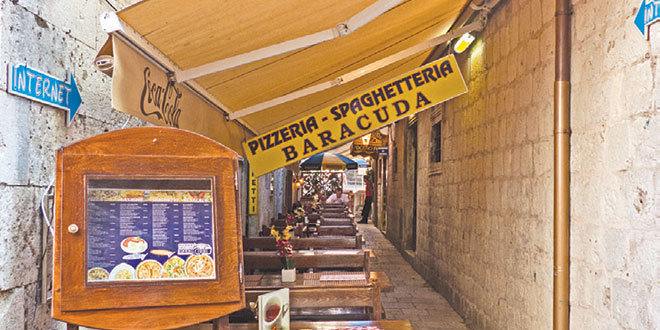 When packing for travel, think about all the items that smartphones and tablets have replaced: alarm clocks, flashlights, cameras, daily journals, books, guide books, maps, newspapers, compasses, foreign language dictionaries, hard copies of information such as insurance cards and camera manuals. One of the most useful for me when traveling has been the replacement of land lines and the ability to communicate with others in a variety of ways.

Telephone plans with companies such as Verizon and AT&T are good only for talk and data in the US. You can purchase an international plan with the major phone carriers, but those plans are often quite expensive. Fortunately, there are other options.

When booking apartments and hotels abroad, I try to find ones with free WIFI, and I use my iPad for everything, including communicating with people back in the States. If WIFI isn’t available, I buy a local SIM card. Usually, for less than $20, I can get a month-long plan that provides all the data usage needed.

Although I prefer email as a method of communication, sometimes more immediate contact is needed, and for that, there are a variety of apps that use the internet for free or low-cost calls, video chats and instant messaging. My favorite is Apple’s FaceTime. It is simple to use, and in seconds, I can be connected, via video, with whomever I want to communicate, as long as they are also using an Apple device. Fortunately, most of my friends and contacts are in that category. Recently, we had to reschedule a flight home, and I needed to contact the friends who were picking us up at the airport. Within seconds, I was connected to them and video chatted to work out all the details. It was comforting to see their friendly faces when we were so many miles away! The video and voice quality with FaceTime are good. You can also do an audio only chat with Face Time.

Skype is the “granddaddy” of communication apps using a Voice over Internet Protocol (VoIP). First developed for the computer and then extended to mobile devices, it offers free calls, video chats and messages to other Skype contacts and low cost calls to people outside of the network. There is a public Skype directory which lists members by email address, user name and phone number. For fee 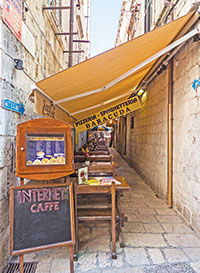 All you need is an Internet Cafe or WIFI to stay in touch while traveling internationally.

calls, you must buy credit ahead of time. International calls are as low as a few cents a minute. Although there are almost 1 billion users of Skype, it is beginning to fall out of favor to other newer services. I have used Skype in the past for both video and voice calls. Although I have had some connectivity problems with it, most people report it to be a reliable service with good video and aural quality. The Skype app for mobile users was recently updated.

In place of Skype, I now use Google Hangouts. Introduced in May 2013, Google is transitioning Google Voice and Google+ to Hangouts. Video calls require the other person be a Hangouts user. If calling another Hangouts contact, the calls are free. Caller ID will register a phone number for your outgoing calls only if you also have a Google Voice number. The nice thing about Google Hangouts is that in the United States, you can also call landlines and mobile phones of non Hangout users for free. For international calls, there is a fee. The fee to a US number from outside the US is reasonable.

Upon return from a recent trip when I did not bring along my phone, I needed to notify our driver from the airport; he was waiting in the cell phone lot. Fortunately, we flew into Ft. Myers which offers free WIFI, so as soon as we collected our luggage, I used Hangouts on my iPad mini to call the driver. Had we been in Miami, I would have had to utilize Boingo, the paid WIFI service at that airport. Since so many people have some kind of Google account and Hangouts comes with a Google account, it should become widespread.

Viber is becoming a popular service. It offers talk, text and media sharing to other Viber users. To contact someone with Viber, that person must also have the app installed on his/her computer or device. There have been complaints about the stability of this app, with reports of crashing. I know people who use it and like it, but it is one app that I will not use because, like Facebook, it searches your contacts for other Viber users. I view this as an invasion of the privacy of others and won’t subject my friends to it.

Vonage, another early provider of VoIP 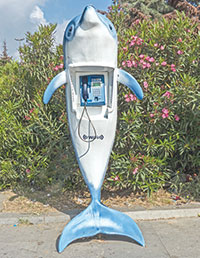 Public phones are difficult to find. This one in the Asian part of Turkey also offers WIFI. PHOTOS By Vickie Kelber

service, offers Vonage Mobile which provides calling and text services. It is free to other Vonage Mobile users; a small fee for others. The call quality is reportedly good, and video calls are an option. Unlike Viber, Vonage asks permission before accessing your contacts.

Developed as a means of communication after the earthquake in Japan, Line has more than 400 million users. Popular in Asia, its use is increasing worldwide. It is really a social messaging app, but can be used for free international calls, chats and messaging. In network calls and messaging to other Line users are free. There are stickers and emoticons with Line, and files such as videos and photos can be shared, as well as group messages sent. When you sign up for Line, it does ask to peruse your emails and contacts to construct a Line contact list.You can avoid that by selecting “register later” as an option.

Ringo is a fairly new offering, and I have not had the opportunity to try it out yet. It looks promising, though. It purports to make international calls without an internet connection. It does this by using local telephone lines to convert the call to a local number and then accesses submarine cables. At its destination, it converts again to a local network. The person you are contacting does not have to have the app installed. Ringo claims it’s fees are about 25 percent less than Skype. If anyone out there is using Ringo, I’d love to hear from you; send me an email.

Traveling and need to hold a conference call? Some of the apps noted above permit conferencing call, but a real contender in this area is Zoom. Designed specifically as a video conferencing tool, its desktop and mobile apps allow up to 25 people to join in with many added features, such as screen sharing, integration with Dropbox, whiteboard collaboration in an easy to use interface. It is free for up to 40 minutes of call time with up to 25 people; unlimited plans can be purchased.

If you do plan to use WIFI for your communication needs when traveling, remember to use a VPN (Virtual Private Network) to secure your connection. There are free ones available, but the one I prefer for a nominal as needed monthly fee is Cloak. Also, don’t forget to pack your charger and a plug adaptor.