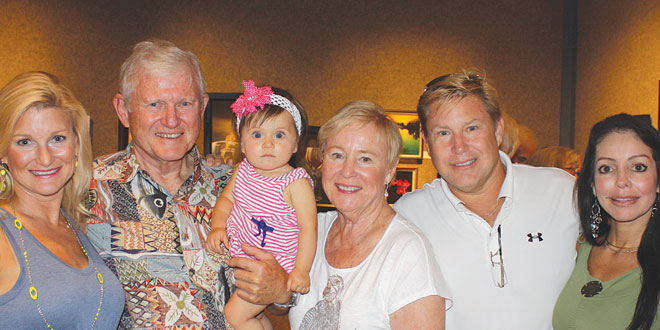 The 9th Annual Stone Sculpture Exhibit at the Marco Island Center for the Arts showcased works by Marco residents who have been literally chipping away at their pieces of art all year long. A reception for the public was held on April 9th and the exhibit stayed in place until the last stone sculpting class of the season, April 15th.

Teachers Frank de la Roche and Joe Cooper spent their Mondays at the Center for the Arts, teaching up to 20 students per day how to chip, grind, mold, smooth and sculpt their chosen type of stone. The only stone sculpting class in all of Collier County was one certainly worth attending as the students’ sculptures were truly world class pieces of art.

Any sculptor will tell you 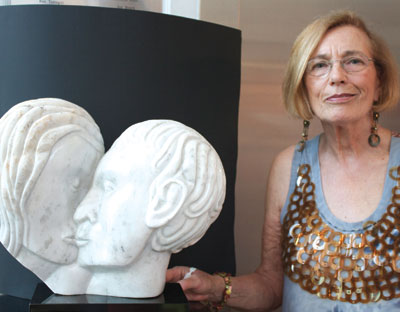 that the slab of stone often speaks to them, guiding them as to how to sculpt that particular piece. Such was the case for Earl Holdsworth, a retired orthodontist who, “needed to do something with my hands after I retired because all I ever did was work with my hands.” He took up stone sculpting at the Center for the Arts a number of years ago and had two pieces on display, both made of African Wonderstone, a medium density wood. His labrador retriever sculpture, entitled “Mine,” was the classic example of the stone leading the sculptor. “This was, in a way, a tribute to my lab who passed and he would always lie with his feet straight out. But the stone wasn’t big enough and called for 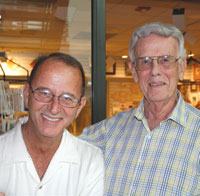 the feet to come in. So I folded them in and added the tennis ball.” Holdsworth’s new lab loves tennis balls and so the piece ended up becoming a tribute to both dogs.

Adelaide Pence has been taking the class for, “eight or nine years. I gave up my Mondays for this class and one day of golf to take one of the classes Frank and Joe offer in Bonita.” Pence had four pieces on display that she made this past season; a loon, a pelican, a baby bird in a nest and another bird made out of white stone. “I still love my golf and walking on the beach and all the typical Marco treats, but this is something that I am truly passionate about,” she stated. 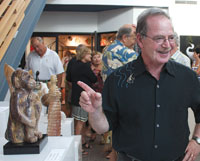 passion. “The Kiss” by Johanna Petropoulis featured two lovers, presumably her and her husband, Aries, molded out of marble. One of the hardest stones to sculpt, Petropoulis first made the sculpture out of clay. The clay model gave her the foresight to understand exactly where and how she would chip and chisel when it came to the marble piece. Many of the other sculptors admired her work as it was so in-depth in design and made with such a difficult type of stone.

“This is one of the most prestigious classes of the year that we hold. The hours of work involved are intense,” added Executive Director Lynn Holley. You just don’t see this on Marco Island, you see this caliber of work in New York City. These students are not just students. They’re sculptors.”