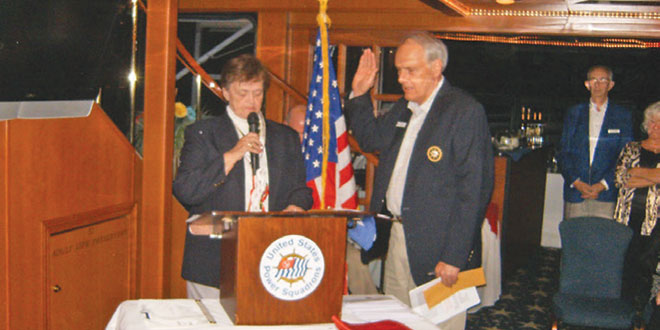 On February 10, 2016, aboard the Marco Island Princess, the members of the Marco Island Sail and Power Squadron met to enjoy a cruise around Marco Island, a luscious dinner buffet of surf & turf, and the installation of the new bridge officers.

Along with local members, there were dignitaries from District 22; District Commander Connie Beckman, District Executive Officer Don Cook, and Past District Commander Jan Lane. Naples Sail and Power Squadron was also represented by the incoming Commander Nancy Nason and her husband, Jack. Closer to home, Marco Island Yacht Club Commodore Randy Harris and his wife Laurie were onboard to join the festivities.

Everyone was welcomed and thanked for coming to the Change of Watch by Past Commander Carl Thieme, who was the master of ceremonies for the evening’s activities. Carl began the evening with a big “thank you” to last year’s officers, now leaving their posts. The new officers will have a large role in the continued success of the Squadron.

The general membership had voted William

(Bill) J. Hughes to lead the organization for the next year. Bill will have Rhonda McAuliffe-Gloodt as his executive officer and Thomas Morr as the administrative officer. Rhonda will oversee all external functions, such as the Vessel Safety Check program, public relations, co-op charting updates, and the Ways and Means Committee. Tom is a new (1st year) member of the Squadron. He said he values the boating training, education, and friendships he received from Squadron members, and that he is eager to give back to the organization. Tom will be responsible for internal functions of the organization, which include cruises, luncheons, social hours, and membership. All bridge officers were sworn in by the District Commander Connie Beckman.

Lori Williams was installed as secretary, with Teri O’Connell, treasurer. Past Commander Ted Reiss will remain as the education officer, where he has just graduated 21 students from the introductory ABC class. Education is the most important aspect of the Squadron’s mission, followed closely by civic service, and a healthy amount of social involvement.