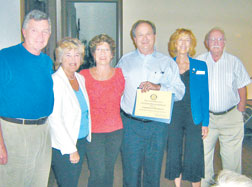 The Marco Island Noontime Rotary Club has announced the recipients of their fourth annual Spirit of Marco Island awards. These awards recognize individuals and organizations involved in the community through their contribution of time, talent and financial support. After the club selects recipients, the recipient is informed publicly and presented with a certificate. This year’s award winners are:

Linda Sandlin presented the award noting that Yanni has been a member of the Marco Island Rotary Club since 2006. He has served on its Board of Directors and has been actively involved in the club through his volunteerism and his philanthropy. He personally sponsored a four year college scholarship for three local students, funded the construction of a school in Guatemala and, over the years, has contributed to many of the clubs community, vocational and international projects.

In addition, as a member of the Board of Directors of the YMCA, he developed its Endowment Fund and has financially supported many of the organization’s outreach programs. He has a passion for child related causes. As an immigrant from Poland, who started with nothing when he came to this country, he worked hard and became a successful neurosurgeon.

Yanni can also be seen volunteering his time with the Knights of Columbus.

Were surprised by members of the Rotary Club of Marco Island who presented them with the 2012 Spirit of Marco Island Award on Tuesday evening in front of a large crowd at the Rose Hall Auditorium located the M.I. Historical Museum.

Linda Sandlin made the presentation acknowledging the Woodwards for their tireless work with the M.I. Historical Museum Capital Campaign. She noted that they have contributed literally thousands of hours over the past several years through fund raising efforts, participating on the design committee, legal work, community and county efforts, as Past President of the M.I. Historical Society, Exhibit Committee members and many other task that have contributed to the success of the new museum. Sandlin also noted that the Woodwards have been involved in many other civic organizations over the years.

Mac was presented his award during a recent staff meeting at the Hilton in front of his managers. 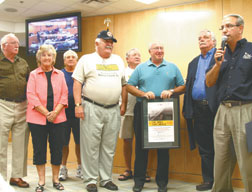 Lee Rubenstein received notice of his award at a City Council meeting.

Mac personally served on many local boards including the Marco Island Area Chamber of Commerce serving as President in 2007, YMCA Board of Directors, Board Member of the Collier County Lodging and Tourism Alliance and several other organizations. He is also a graduate of Leadership Collier.

The Pidherny’s received news of their Spirit Award in front of nearly 60 people at their weekly Kiwanis meeting. Dennis is President Elect of the Kiwanis Club and is also a Co-Chair of the Marco Island Seafood Festival; a fundraiser sponsored by the Kiwanis Club along with the Sunrise and Noon-time Rotary Clubs of Marco Island. He is the President of the Marco Healthcare Auxiliary and serves on the Healthcare Center Board of Trustees. He is a member of the Knights of Columbus and recently took on the responsibilities of Executive Director of Bedtime Bundles.

Joan is President of the San Marco Catholic Church Columbiettes; she is an active member of the Kiwanis Club, and also serves as the Volunteer Coordinator for the Marco Healthcare Center.

As part time residents, Dennis and Joan contribute hundreds of hours during the year to these organizations, however they are just as active in their northern home where they were honored by the Governor of New Hampshire with the recognition of “Volunteers of the Year!”

Lee was presented the Spirit of Marco award by the Noontime Rotary Club in front of City Council on Monday. Lee served as Chairman of the Veteran’s Memorial fundraising committee at Veteran’s Community Park. Under his direction, the committee raised over $100,000 for the completion of the memorial in just a few months. Lee oversaw the construction of the project and served on the original Veteran’s Memorial Park design committee for the City of Marco. Lee is a past Commander of local VFW Post 6970. Lee was responsible for bringing the Travelling Vietnam Wall to Marco Island in December which touched the hearts of thousands in the area.

The Rotary Club of Marco Island will be hosting its 4th Annual Spirit of Marco Island Gala Awards Dinner and Silent Auction on Friday April 13th at the San Marco Catholic Church Parish Hall, where all of the recipients will be presented with their formal awards. The evening features a buffet dinner with a cash bar, dancing and a silent auction. The proceeds from the silent auction will be used to support local charities and college scholarships.