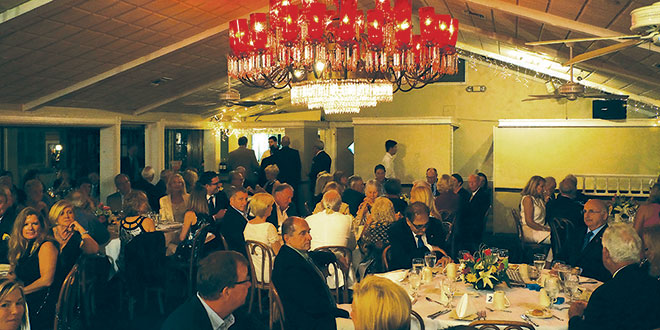 The Rotary Spirit Awards drew a crowd to Bistro Soleil on February 21, 2016. PHOTOS BY JESSICA HERNSTADT

The 2016 Spirit of Marco Island Award Gala Awards Dinner and Silent Auction was held on February 21st at the Bistro Soleil Restaurant in Old Marco. Two individuals and three couples were honored for “service above self.”

Noontime Rotary President Lynne Minozzi and Spirit Award Committee Chair Al Diaz presented awards to Tarik Ayasun, George and Mary Baron, Ron and Pat Rutledge and Tom and Lori Wagor. Award winner Ben Farnsworth was recovering from bypass surgery in the hospital, but his daughter Jane attended to receive his award while he listened, and spoke to the audience via speaker on Al’s cell phone.

Award-winner Tarik Ayasun told the crowd that he was influenced by his mother, who volunteered at orphanages in Istanbul, Turkey when he was growing up. He is dedicated to the education of children, and currently serves as the board president for the Marco Island Charter Middle School. He has been on the school’s board for fifteen 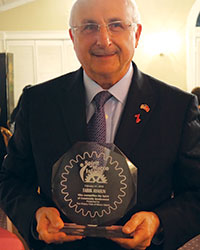 George and Mary Baron have been Marco Island residents for 23 years. They have shown a strong commitment to the Marco Island Center for the Arts and the Guadeloupe Center, among many other non-profit organizations. Mary, who was a real estate developer and agent in the 1960s was described as a “pioneer” by Al Diaz. Mary graciously thanked the audience and told them, “I love to be amongst people who want to make a difference in the world.”

Ben Farnsworth has been a volunteer for Meals on Wheels for many years. He described an incident where he delivered a meal to a lady who seemed lonely. When his wife asked the lady if she needed anything 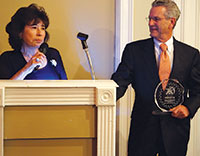 George and Mary Baron address the crowdafter being honored.

further, she answered simply, “a hug.” Ben hugged her and said that she wouldn’t let go for a long time. She told Ben that she had not been hugged in the thirteen years since her husband passed away. The story moved the crowd, and also illustrated the kind of person Ben is. Ben’s daughter Jane was in attendance, and she accepted the award on his behalf. Via speaker, Ben said he was “honored and grateful” to receive the award.

Ron and Pat Rutledge are active with the Marco Island Historical Society, she as the board president and executive director and he in a number of volunteer and supporting positions. The Rutledges are also members of the City of Marco Island’s Police and Fire Rescue Foundations and the Marco Island Chamber of Commerce. Pat told the audience, “I stand on the shoulder of giants.” Adding, “It is truly an honor to be recognized by an organization that places service above self.” The 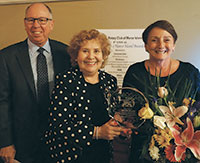 From left: Ron Rutledge, Lynne Minozzi and Pat Rutledge. The Rutledges received their Spirit Award for their many contributions to the community, including to the Marco Island Historical Society.

couple graciously congratulated all the past and present honorees, and expressed their love of Marco Island. Ron called the award experience “humbling,” and thanked everyone for the “special recognition.”

Tom and Lori Wagor have been Marco Island residents for forty years. Both are supporters of the Marco Island Historical Society. Tom was honored with the Chamber of Commerce’s Lifetime Achievement Award in 2009. Lori has chaired many charitable events for the community. The Wagors are both involved in a variety of local civic and charitable organizations. They were described as “hard working” and “always willing to help.” After receiving the award, Tom said, “Volunteering is a labor of love and a way for us to give back.”

The Noontime Rotary Club uses all proceeds from the Spirit of Marco event and silent auction to support local charities and scholarships.